There's nothing worse than that pit-of-the-stomach feeling when you realize your dog has escaped.

We were having a new furnace installed. I hadn't closed the dog door which lets Cully out back. I figured that all of the workers had their own dogs and would understand that the gate needed to be kept closed. But I hadn't really understood their focus on the job at hand and the amount of back-and-forthness there would be to the AC unit out back.

I pretty quickly realized that Cully wasn't home. She had been popping in and out the dog door all morning checking on the work that was being done and when the dog flap stopped flapping my subconscious prodded me out of my chair to check on her whereabouts. She was nowhere to be found.

I asked the furnace guys if they had seen her but they hadn't. They immediately started calling for her, but I knew that would be futile. If she didn't come when I called, she wasn't likely to come to relative strangers, no matter how much she liked them. I grabbed her leash and treats and started off up the cul-de-sac. Since the gate that she escaped through was on that side of the house, I guessed that she'd probably just keep going in that direction. I didn't see her in anyone's front yard and the house next door was fenced but none of the houses after that had enclosed yards.

She hadn't gone far and she wasn't alone. Lionel, her trusty partner in crime was with her in the backyard just beyond the next door neighbor's. They were together sniffing at something in the grass. When I called her name, Cully lifted her head and took off further into the yard in a spastic run, the kind she does when she's got something that she shouldn't have and knows she shouldn't have. The great escape was now a big game.

I ran into the yard, pulled the treats from my pocket, and waved them in the air to get the scent blowing in her direction. Cully was running circles, mouth open in a big grin, butt tucked. She ran a few more circles then stopped, nose in air. I called her name and held a treat for her to see. She paused for a few seconds to think it over, ran a few more circles, then came at a dead run towards me stopping long enough for a quick snack and for me to grab her collar.

Cully, prancing, was accompanied back to the house by her self-appointed, furry, yellow bodyguard. Exhausted by their big adventure, the friends slept away the afternoon. 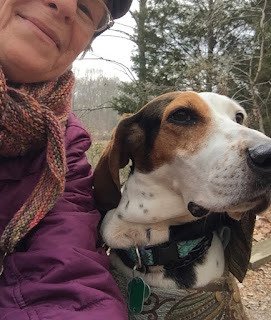 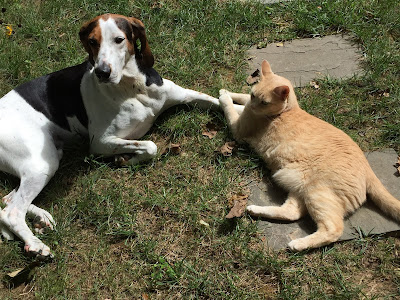 From Z to A

"Where are the zucchini?" asked Gregg.

"On the kitchen counter." I replied.

There was a long pause.

I sighed and got out of my chair to point out the obvious. I was thinking that, as usual, he couldn't see what was right in front of his nose.

But the zucchini weren't on the counter. Maybe, I thought, I'd left them in the fridge. Nope, not there. Maybe I'd accidentally put them in a cabinet. We checked all cabinets. Nothing. I was getting a bit desperate. I wondered if I'd thrown them in the dryer or left them in the bedroom.  I was wandering around the house looking for zucchini but found no zucchini. No zucchini remnants. No skin, no stem. Nothing.

Neither one of us thought that the zucchini could have been a victim of counter-surfing. Our Ray would never have let an entire raw zucchini ever touch his lips never mind steal two of them. But this girl dog...hmmm. And although we wondered, we decided to give Cully the benefit of the doubt and chalk the zucchini up to covid brain.

Three days later an avocado disappeared off the counter. The pit, however, was found in the backyard being joyfully played with by a certain vegetable-loving hound.

A couple of months ago, I hired a dog trainer. Although we had conquered most of Cully's fear issues, her fear of trash trucks continued to be a problem. And as she became more confident, her dog aggression  seemed to get worse. Although her dog aggression is still not under control, today we walked by a trash truck without Cully trying to back out of her skin, escape to the nearest backyard, or even walk up into the middle of someone's front yard. It has only taken one year, three months, and an enormous amount of treats but she is finally getting it. Although this might seem minor, this a major victory.

Next up, dog aggression. And then maybe we'll tackle that little issue of counter surfing...

Gregg and I like to watch mysteries. Cully is actually named after a character in one of our favorites (Midsomer Murders). So when our girl-hound started digging on the stair landing, my mind immediately assumed that there must be something sinister buried in that spot. Because, you see, that was Ray's favorite indoor place to dig. Outdoors he was not particular and neither is Cully. But indoors they both chose/choose the exact same location. As a matter of fact, Ray dug the stair landing so much that by the time he died there was very little rug remaining there.

That is a coincidence. But not the weird one. The weird one is in the video. I took the video of Cully on  January 8, 2021 when I just happened to be sitting on the stairs with my laptop and she came up behind me and started digging. And when I found an old video of Ray that I had taken when he was still alive, it was from January 7, 2018. Almost exactly three years to the day from the other. So, do dogs need to go through some weird ritual digging in the early days of the new year to assure a good bone harvest? Or is there a body buried beneath our stairs (cue creepy music).