Twas the Night Before Christmas...

…and right on cue, the creatures stopped stirring. 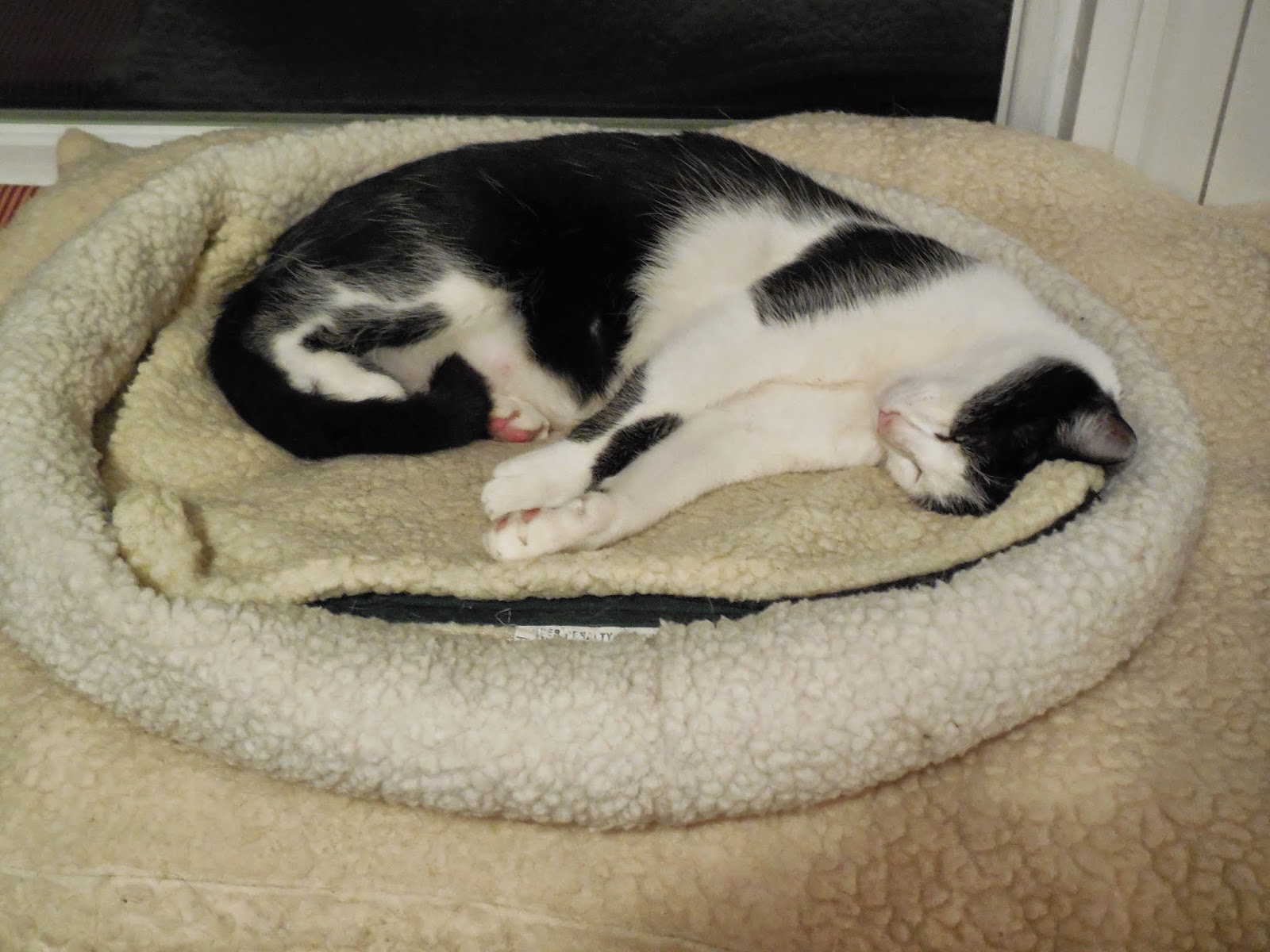 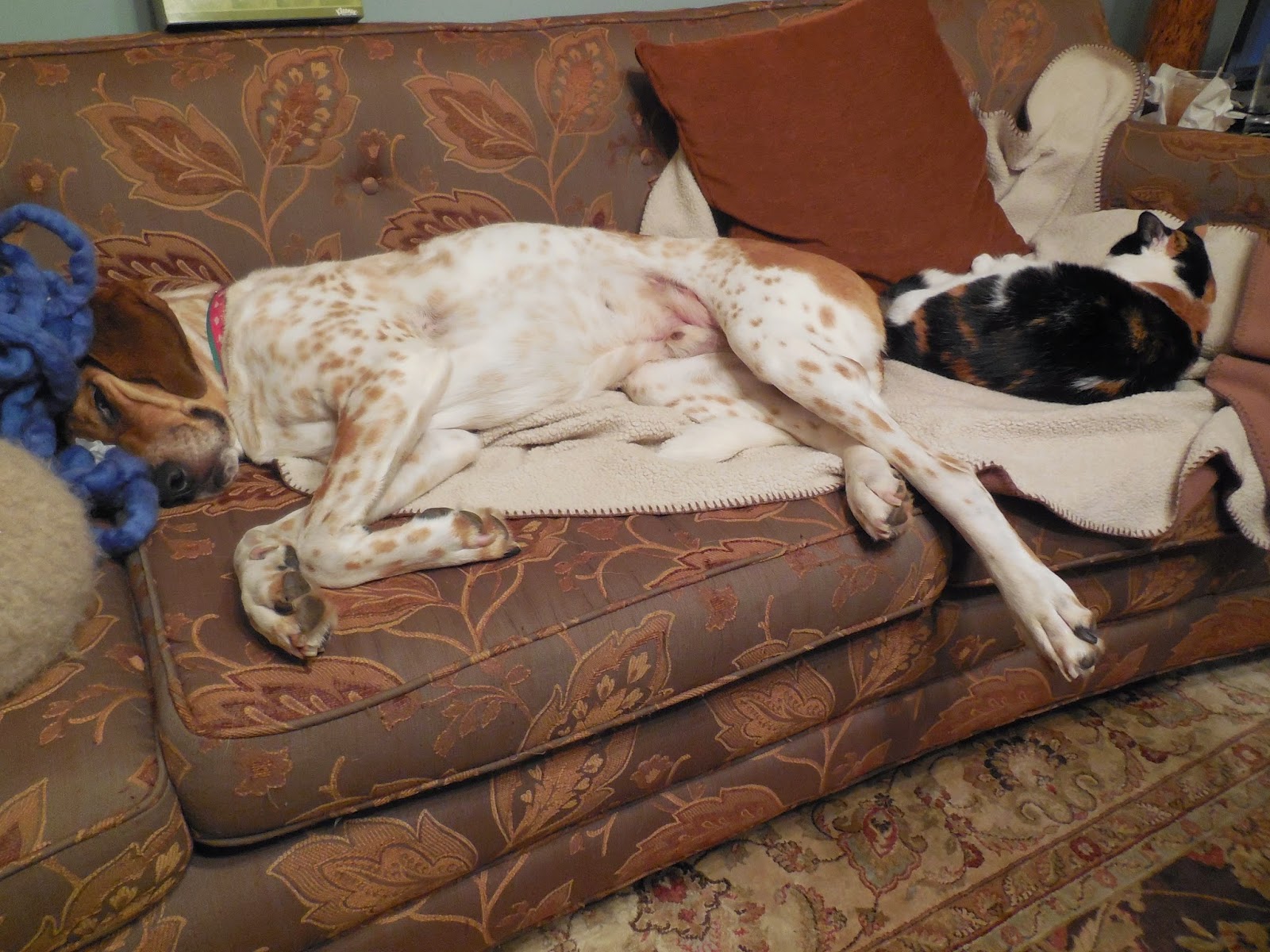 Merry Christmas everyone
from Ray the Blind Dog
and Family

"Is he always this weird after a bath?" Gregg's voice wafted up the staircase.
"What's he doing?" I shouted back.
I was cleaning the bathroom after having shunted the dripping dog to a waiting Gregg. I had known for a couple of weeks that Ray needed a bath because he'd been sneaking into the laundry room and stealing fabric softener sheets to roll on. Strangely, the hound can't stand the smell of stinky dog.
"He's racing around and acting all goofy," the voice replied.
"Did he go out back and dig a hole?" I queried.
"Yeah," replied Gregg.
"Then, yeah, that's normal," I answered, grinning, thinking of Ray's SOP (standard operating procedure) and hoping that Gregg would knock some of the dirt off of Ray's belly and legs and clean his claws before letting him back into the house.
Fifteen minutes later, the fluffy dog was stretched out on his blanket on the bed. His belly and legs were clean; his claws however were caked with mud. Two out of three, I thought. Not bad.

I heard paper ripping, never a good sound when one is not the one doing the ripping. I hurried into the front hall and found Ray happily tearing open a present. I saw with horror that it was Gregg's present from my sister, Kathy. When I had opened the box from Colorado on the previous day, I had left the gift on the kitchen counter. Gregg must have dropped it under the tree when he got home, I thought as I extracted the ever-so-slightly-damp-and-dog-toothed book from the grinning Ray.
When Gregg got home that night I met him with the news.
"Did you put it under the tree?" I asked him about the gift.
"No," replied my lovely husband, "Last time I saw it, it was on the kitchen counter."
I shook my head ruefully, amazed, as always,
that a blind hound would know that there was a wrapped present on the kitchen counter. Although, why Ray would think that someone was sending him a BOOK for Christmas is a bit of a mystery.
In an entirely different, but totally related, vein. Someone ate the top off of a cinnamon bun left on the same kitchen counter. It was tidily done; the bun never moved from where it had been left, but the frosting was gone. Although I can't be 100% sure, I'm fairly certain The Dumpling did it. She of the broad palate. Harvey has a much more refined taste in food. Juno will eat anything not nailed down.
So that's two of the three kids on Santa's naughty list. For now.

We had just finished decorating the tree. It had sat naked but for lights for over a week and now the final string of gold beads was hung. It was finally done. I breathed a sigh of satisfaction and went to sit and admire our handiwork.

As always, Ray was a gigantic help, positioning himself between me and the tree or me and the bin of ornaments until, in total exasperation, I told him to "Golaydown." Ray huffily complied only to be replaced by Juno and Harvey. While Harvey enjoyed basking in the shade of the tree under construction, Juno took a more Ray-like approach to the whole process. Although, instead of getting between me and the decorations, she just positioned her dumpling self on top of them.

As I sat relaxing and enjoying the moment, I heard lapping. Harvey, feeling a bit thirsty after all the activity, was helping himself to the Christmas-tree-water. Having read just recently that animals should not be allowed to drink Christmas-tree-water, I yelled in my dog-correction voice "Hey! Get outta there!"

Whereas the reaction from Ray would be a look of mild enquiry, the reaction from Harvey was a bit more dramatic; he exploded from under the tree taking with him a string of lights, a length of gold beads, and three ornaments. I heard the dog-gate crash as the panic-stricken cat shot through the small-animal escape hatch, and then the fhwwwwip of the cat flap into the garage.

Laughing, outraged, and feeling more than a bit bad about Harvey, I went to re-decorate the tree. In his frantic flight, Harvey had unplugged the string of lights and snapped an ornament in two. The other ornaments had been stripped out of their dangly holders. I re-hung the gold beads on the lower branches of the tree and went to look for the scaredy-cat.

Harvey was hiding in the garage. Although he came out of his hiding place when I called, he wouldn't let me approach him, just mewed and paced anxiously. I saw a flash of orange out of the corner of my eye and realized that he had been followed by Juno who was also hiding and wouldn't come out at all.
That is, wouldn't come out at all until Gregg came and shook the treat can. The Dumpling came right inside. It took Harvey two more hours to calm down.

Note to self: Do not use dog-correction voice with cats.

"Does Harvey sleep on the chair anymore since I replaced his cloud with monkey fur?" I asked Gregg.

The preceding sentence sounds cryptic, but the meaning is clear enough if you know that the recliner in the family room had been appropriated by Harvey ever since I had to semi-destuff one of Ray's beds just before a trip south to fit it into the car. I had left the de-stuffing in a heap on the chair, and while Ray and I were out of town, Harvey took to sleeping on the pile. The blissful frenzy of kneading that occurred before every nap convinced us to leave the pile of stuffing on the chair and refer to it as "Harvey's Cloud." Recently, however, I bought some furry fabric and made a cushion, stuffed it with Harvey's Cloud, and put it back on the recliner. I hadn't noticed if Harvey had resumed sleeping on it since the replacement.

"He uses it," replied Gregg, "I saw him on it just recently."
"Good," I said, "I would have hated to take away his favorite sleeping place."

An hour or so later, Ray, having of course understood every single word I had said, and needing to check out the comfort level of monkey fur, was sleeping on Harvey's new cushion. 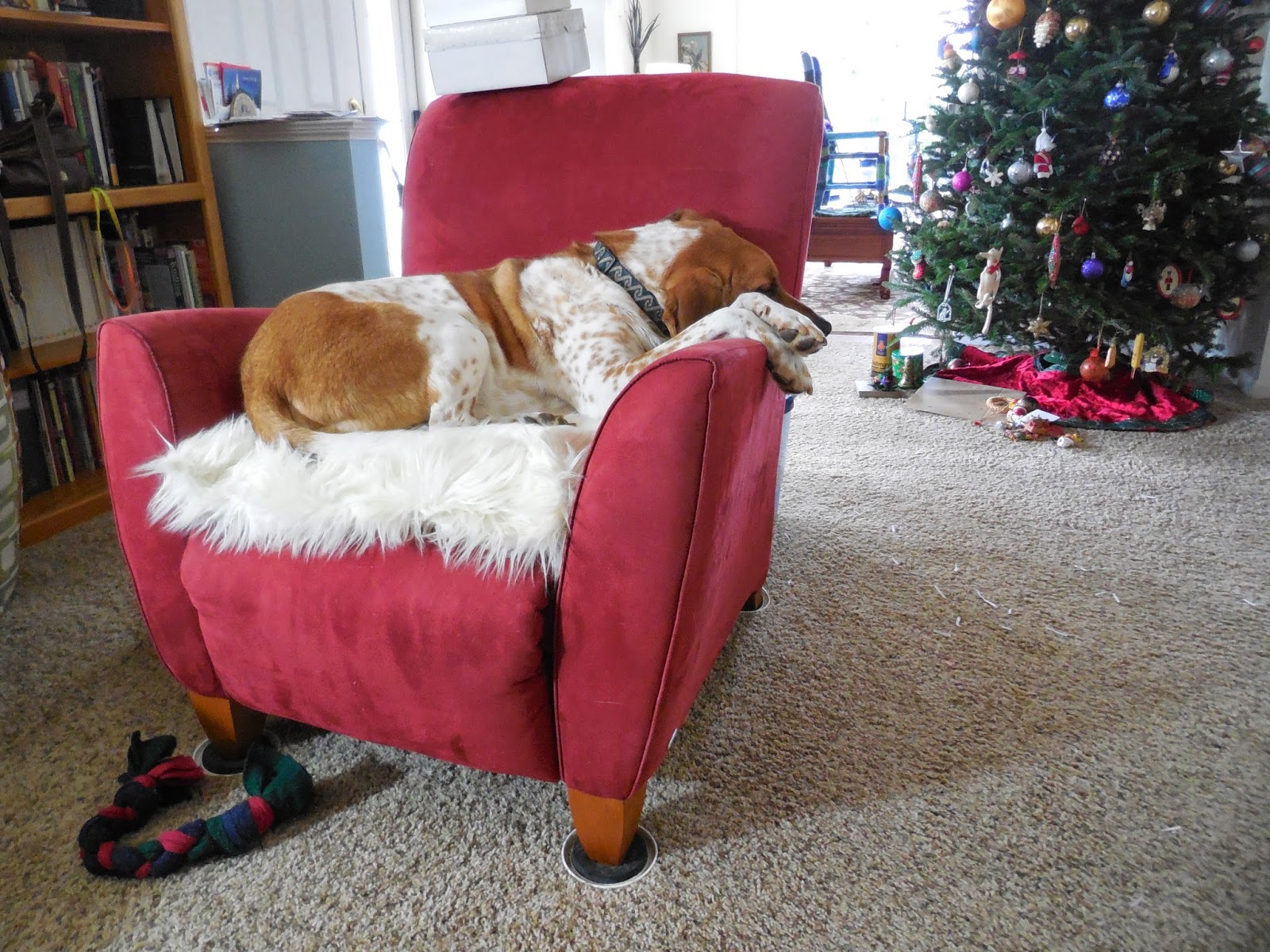 I had been doing a spot of Christmas shopping. (I hate shopping in general and Christmas shopping in specific but a body's got to do what a body's got to do.) It was 2:00, I still hadn't eaten lunch and I was more than a little hungry so, in a moment of lunacy, drove through a McDonalds and picked up two cheeseburgers. I thought I was hungrier than one cheeseburger, knew I wasn't as hungry as two, but since I was on my way home I figured I would just share my second cheeseburger with Ray.

When I arrived home, I was greeted at the front door. I got Ray's usual half-hearted tail-wag, the one that says "Oh, it's you again? I was hoping for someone better" but since I was carrying a sack of food, was then trailed by the hound into the kitchen.

Thinking I needed a laugh after my fruitless shopping expedition, I extracted a french fry ('chip' for the British contingent) and handed it to the Nose who was intently sniffing at the countertop where resided the sack. As expected, Ray, a dog of exquisite taste and sensibility, curled his lips back, took the fry gingerly between his teeth so that it could touch no part of his anatomy, and spat it contemptuously on the ground. I laughed.

I then took the remaining burger out of the bag, tore it in half, removed the bun, the pickle, and the ketchup and handed it to the dog. Ray, never having had a McDonalds cheeseburger before, took it suspiciously. Holding it in his teeth by one edge, he flapped it up and down a bit then, determining through the flapping process that it was indeed food, Ray let the cheeseburger enter his mouth. A great display of head bobbing and theatrical chewing ensued. At length, the small piece of burger was consumed. What passes for cheese, however, was expelled as a slimy glob onto the kitchen floor. The discriminating dog had spoken loudly without uttering a sound.

A random assortment of photos from the last few months

I was sitting on the couch in the family room working on a Christmas project, watching TV with half and eye, and ignoring the noises coming from the dining room. Since I and the animals were the only ones home, I knew noises weren't a good thing, but being totally involved in my project, I didn't want to check out the source. I had a pretty good idea whence the noises emanated, and I didn't want to deal with it.
Ray had been lying beside me with his hound-head on top of my shoulder examining my work, but when the noises started, even though the head didn't move, the ears deployed and the eyebrows started their dance of inquisition.
After a few minutes, the hound-head removed itself. Ray sat alertly, looking in the direction of the noises. After a few minutes more, the big, curious dog could stand it no longer. He levered himself from his spot on the couch and, neck outstretched to the max, went to investigate. I sighed and started to put aside my work, an involved process taking several minutes.
I heard a GAK, then another, and another.
Thinking perhaps that Ray had eaten something he shouldn't, I dropped my work in a heap and hurried to the dog.
Ray was standing over a dead vole, his ears fully deployed, his head tilted to one side. Juno, the murderess, had retreated behind the dog gate to the laundry room and was remotely keeping an eye on her prize. As I watched, Ray lowered his head and cautiously sniffed the dead thing. He GAKked recoiled in revulsion, then did the same thing again, then again.
Apparently dead voles are repulsive-smelling to dogs and it takes several sniffs to establish this fact. I retrieved a wad of paper towels and removed the corpse from the room.