Did someone call a landscaper? 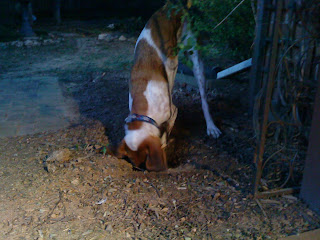 I used to have a (favorite) shrub in this spot. It split in half from all of the snow this winter and struggled to survive all summer long. It finally gave up the ghost about a month ago. I'd been meaning to take it out but it was just so darn hot. Then it got dry - not the best for digging, I was waiting for a good soaking rain to make shrub extraction a bit easier. About a week ago Murphy and Ray decided that it was time. Limb by limb they literally tore the shrub apart, (egged on by Rachel, Josh, and I) until all that was left was a piece of root in the ground and a small piece of still-attached trunk protruding from the earth. Ray was determined to get the last of it OUT (he was not deterred by hard, dry dirt.)
He's still working on it but I have every confidence he will succeed. At least, he will if he would just stop dropping bones in the hole and covering them up. Then digging them out. Then covering them up. Then digging them out. Then covering them up....
Posted by Ray the Blind Dog at 6:12 PM No comments:

Work is keeping me busy and Ray in school. So I am officially taking a short Blog Break until the project I'm working on is over. I have invited Murphy's mom, Rachel, to blog about Ray and Murphy's sleepover last weekend. She has a short video and a couple of photos from their marathon playfest (Gregg and I were out of town at a wedding). But until she gets around to it, you'll just have to make do with butterflies, sunny yellow flowers, and a shot of my handsome blind dog (and handsomer husband). 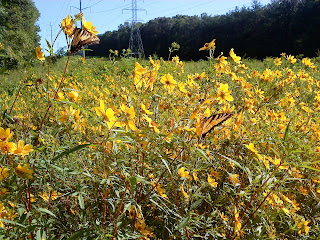 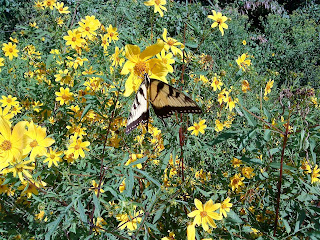 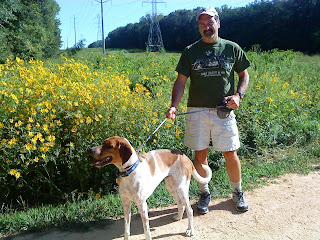 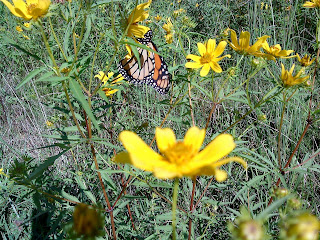 Hey do I have something stuck on my side? 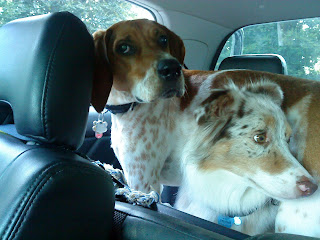 Posted by Ray the Blind Dog at 6:43 PM No comments:

Labor day weekend is the dog swim at our local pool. Ray is a natural as far as swimming goes. He is a STRONG swimmer. (He must take after Gregg who swims like a fish. I mostly just 'flounder' around.)
Ray was pretty excited to go to the swim. All those dogs and people had him really wound up. Still, he was a bit calmer than last year. Last year he pretty quickly picked a little dog to hound and then wouldn't leave the dog alone and wouldn't shut up (to the total bemusement of the dog's owners and the amusement of everyone else). This year he didn't start yelling until we'd been there for a few minutes, and then he seemed to yell at nothing in particular. (Maybe it was the sheer thrill of it all.) He sure is an attention getter.
Ray's girlfriend, Kappy, was here to join in the fun and took some photos. 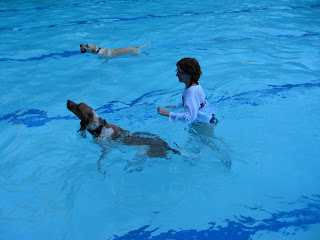 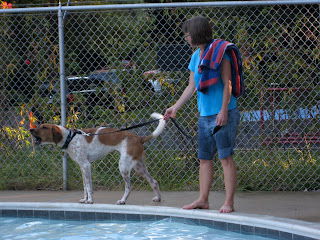 WILL EVERYONE PLEASE GET OUT OF THE POOL! 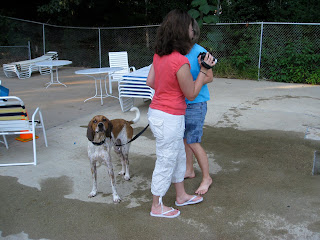 Did Someone Say there was going to be pizza afterward? 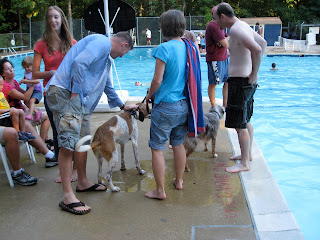 Yes, he does have a fine voice, doesn't he? 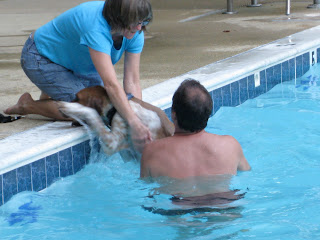 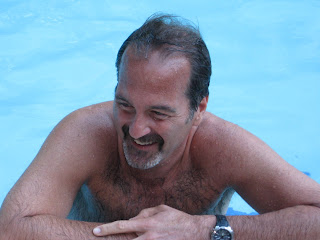 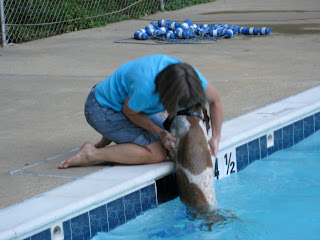 Last swim of the season
Posted by Ray the Blind Dog at 3:46 PM 3 comments:

Last night, shortly after we airlifted* Ray to his bed, he started snoring. It wasn't just any snore. It was a Three Stooges kind of snore, complete with whinnying and flapping lips. I've often thought I should make a video of Ray's grunts, groans, and moans and this noise would be at the top of my list to capture. It's one of those noises that really makes us sit up and take notice because it sounds so fake.
* airlifting - the process whereby we grab four corners of the afghan on which Ray sleeps and carry him to his bed. We move him from the couch to his bed, because he curls up on the afghan, which is usually on my feet, and takes up so much room that I am jammed into one tiny little scrunched up ball. Very uncomfortable for any length of time. Ray rarely wakes up during the airlifting process and when he does, he doesn't struggle or try to jump out of the sling, he just waits until we deposit him in bed then settles in with a deep moan, or sigh, or both as if he'd been waiting for this moment all day. Sometimes airlifting is accompanied by helicopter noises from me and commentary from Gregg such as "I don't think that one is going to make it" (after a particularly hard day at daycare.) Airlifting occurs once every evening unless Ray is too tired to move himself from the couch in the living room to the couch in the family room.
Posted by Ray the Blind Dog at 4:41 AM 1 comment:

Ray was so scent-deprived from his walk yesterday (where he did not smell a SINGLE thing all the way 'round the block) that he made me late this morning. He sniffed every single light post, fire hydrant, mail box post, bush, clump of grass, and cable box on our walk. He would not be rushed.
Posted by Ray the Blind Dog at 4:30 PM No comments:

Ray and the Stick Game

Josh, Murphy's dad, had carpool duty this morning, which was a good thing because I got up late. I decided at the last minute to try to fit in a quick walk with Ray before Josh came to get him. I figured, if nothing else, we could make the short loop around the cul-de-sac. I was only as far as my neighbor's house when I saw ahead of us, Josh walking Murphy. Murphy was carrying a stick.
"Do I have time to go around the block?" I asked Josh. "Oh, yeah," he replied, "I haven't even had a shower yet."
"Do you want me to take Murphy too? I inquired. "Sure! That would be great," he said handing over her leash.
Murphy still had the stick in her mouth. Ray, as usual, was thrilled to be with his friend. He discovered, in very short order, that she was carrying a stick and tried to grab it. This is a very dicey thing for a blind dog and I always try to monitor the situation without being overprotective. I don't want him to lose his eyeballs but I want him to be as normal a dog as possible.
Ray managed to grab the stick right next to where Murphy had ahold of it and a short game of tug of war ensued. The clock was ticking, however, and I had to get the dogs around the block before their "schoolbus" came to get them. We headed off down the street, the dogs side by side each holding on to the stick. We rounded the first corner and made it half way up the short end of the block when Murphy lost interest and let go of the stick. I was surprised. Usually it's Ray who quickly loses interest in games (short attention span dog).
I thought Ray would drop the stick when he realized that Murphy didn't want it anymore, (or when he caught a whiff of something interesting) but Ray continued on around the next corner, prancing a little with his head held high, prize still in his mouth. Murphy realized that Ray still had the stick and grabbed ahold again. They walked another half block, sharing the scrap of wood, when Murphy again lost interest. Ray continued on down the street, tickled pink that he was once again the winner. I thought for SURE that Ray would drop the stick at this point but we rounded the third corner of the block with Ray still prancing along carrying his stick. Murphy decided that maybe there was something to this stick (that she didn't realize the first two times she had ahold of it) and grabbed on again. We made it around the next corner when Murphy let it go again. I was starting to wonder if maybe she was just being a good sport in a game that made Ray so happy.
Ray carried the stick the rest of the way home and dropped it in the front yard. He hadn't stopped to sniff a single thing on his way around the block (it probably just about killed him), but for the first time in his life, he won the stick game (whatever it was) and he was happy.
Posted by Ray the Blind Dog at 3:39 PM No comments: