The romance between the two had started out white-hot even though Halle's supermodel sang-froid didn't allow her to show that she was smitten with the rambunctious blind boy from The South. But Ray could tell. He was devoted to her from the first.

Ray was heartbroken when Halle moved to the west coast. So last year when she returned, the cooled romance settled into an old-couple best-friendness. Like every old couple, they liked to walk together, sniff the same things, and pee on them. And they liked to visit each other, eat snacks, then lay around the house. Being together was enough.

Halle's family is devastated.
Ray and I are too. We will all miss her. 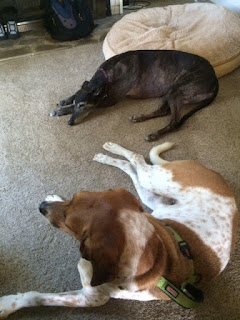