It was late in the day and I was in the bedroom putting my laundry away. Ray had followed me upstairs, jumped up on the bed, and made himself instantly comfortable.
I turned on the TV, which is mounted above my dresser. King Solomon's Mines was playing. While I sorted my clothes, I watched Stewart Granger save a native then subdue a cobra with his hat (what a man!).
I finished sorting and was stashing piles of clothing in multiple drawers when Ray stood up and moved to the edge of the bed to 'watch' the TV. Curious, I looked up to see what had caught my dog's interest.  Stewart and Deborah (Kerr) were making out in the jungle. I wondered what it was about the steamy jungle scene that fascinated the blind dog when I realized that the background noise was monkeys. Ray's head was tilting back and forth as he tried to make sense of the sound of monkeys in the bedroom.
"Uh, Ray," I said to the hound, "It's just the TV. There aren't really monkeys here."
Embarrassed that he'd been fooled and slightly disappointed that he didn't have a monkey to play with, Ray turned back to his spot on the bed and curled up with his nose tucked under his tail. But his eyes were open and his eyebrows were doing the dance on his forehead. He was still listening to the sound of monkeys and I knew he was daydreaming about having one of his own.
Posted by Ray the Blind Dog at 6:22 AM 3 comments:

Friday it snowed a bit. Saturday it was one degree above freezing. Both of those things don't mean much when viewed independently, but together they mean a muddy back yard. And the laws of the universe being what they are, it was a day that Murphy paid us a visit.
Josh and Rachel came by, dropped off some Christmas presents and Ray's best friend, then headed out to take Marvelous Marva to lunch. Ray and Murphy stayed behind to tear around the backyard, dig holes, and have a generally wonderful time. I stayed behind to try to keep Pigpen wiped down enough so that we wouldn't have to hose down the lower level of the house after she had left. It was a feckless task.
The Magic Mud Colored floor tried valiantly to disguise the mud clods, ice clumps, and leaf mulch dragged in on Murphy's hula skirt but after an hour or so, the words "Epic Fail" started to float through my brain.

It didn't matter. The dogs were having so much fun that, after Josh and Rachel returned, we abandoned the wipedowns and just laid a path of towels from the dog door to the living room expecting most of the mud and snow and mulch to collect on this lazy-man's cleaning system. It worked well enough.
After our guests left, Ray and I went for our afternoon jog around the block. I fed him. Then fed him again. And again. Seems he'd worked up quite an appetite playing with his old pal. By 5:00 he was passed-out on the couch. So much so that when I started vacuuming, Ray, who has an antipathy for vacuums, remained immobile. For the rest of night.
Now THAT'S a good time.
Posted by Ray the Blind Dog at 6:51 AM 2 comments:

Winter has finally settled in. The temperature has plummeted from near 60F (15C) on Saturday to 22F (-5C) today. Yesterday we had a dusting of snow and today we are expecting a couple of inches.
Everyone knows that winter weather brings winter clothes. And the problem with winter clothes is they are bulky and uncomfortable.
Today Ray demonstrated exactly how bulky and uncomfortable he finds his winter clothing. I strapped him into his sniffing sweater and he was unable to perform the most rudimentary activities. The sweater was so cumbersome that he needed to be lifted into the car because of the extra weight on his back. It was so incommodious that he was unable to lay down in the back seat as he usually does; he was only able to sit uncomfortably. And, worst of all, it was so burdensome that he was unable to poop. He tried. Lord knows he tried. But all that extra weight made it downright impossible.
Posted by Ray the Blind Dog at 9:22 AM 4 comments:

Searching for a Friend...

Lately, I've been wondering who Ray is going to play with once Tucker moves. It's sad to think about, but it's going to happen this summer, and once again, Ray is going to lose a good friend and a playmate.
So, when we walk, I try to have a friendly smile on my face (but not too friendly, I don't want to look demented) and walk with one eye cocked toward people with dogs. We immediately eliminate Boxers and other bullys, since Ray has decided that he doesn't like those, and I also eliminate most Golden Retrievers because of Ray's penchant for those snuggly blonds. (He'd be getting some kind of exercise but probably not what the other owner had in mind).
New friends can't be too big, or too small, or too mean, or too timid. And they need to be fast and tough enough for Ray to chew on their necks. Murphy and Tucker are ideal playmates because they are both fast and have thick neck fur. Ernie, who is still a puppy, (although not as small as in the linked posting), is fast and wiry but not particularly tough.  I'm always a bit worried that Ray is going to break him.
So the other day while Ray and I were out walking, we met Bentley, a youngish lab/hound mix with a black body and brown legs. Bentley is about 20 pounds lighter than Ray and he looks fast, like he has energy to burn. And even though he doesn't have thick neck fur like Ray's other friends, he doesn't look particularly fragile either.
He and Ray didn't act like best buddies or anything but there were no obvious signs of dislike. Best of all, his owner was looking for a playmate for him. So, one day soon, we'll give it a shot and see how it goes. Because if it doesn't go well, we need to keep looking. The clock is ticking and June is not that far away.
Posted by Ray the Blind Dog at 5:29 AM 9 comments:

While I wait for Ray to do something interesting so that I can blog, here is a photo for his 39.5 fans.
Posted by Ray the Blind Dog at 6:17 AM 6 comments:

VIDEO ALERT: Ray the Blind Dog and the Hex Bug

For Christmas, our friend, Roger, gave us a Hex Bug. For those of you who have never seen one before, a Hex Bug is a battery-powered robot bug. Roger thought that perhaps our cats would like it as a toy.
Although Hugo gives us an "Oh, puh-leeze" look whenever we fire it up, Moonie is rather fascinated by the thing. She likes to watch it run around but gets a bit freaked out when it actually starts to move towards her. Ray, however, is made of sterner stuff.
So, for your enjoyment, here is a video of Ray protecting the world from a robot bug. 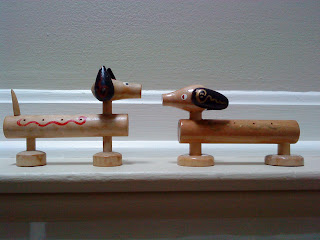 It was the usual 5 o'clock wake-up call. I rolled out of bed at the same time as Gregg.
"I'll get it," I said.
"No, I'll do it," replied my lovely husband, "No sense in both of us being up."
I was awake, so I threw on my sweats and followed him down the stairs. Gregg hooked Ray to the leash to take him out while I fixed a bowl of gruel for the old woman howling at my feet. I put the food in the microwave for its usual 6 seconds and took a step outside to see what the weather was like. It had been unusually warm the past few days, and the mornings have been foggy and eerie. This particular morning was relatively balmy and gently raining.
I reentered the house. Moonie was still in the kitchen, pacing, waiting for her breakfast. Gregg came in with Ray and turned him loose. I gave the dog's feet a halfhearted swipe with a towel and watched as he ambled toward the stairs then hesitate at the bottom step waiting for me to join him.
I put Moonie's food on the floor in front of her and went to join the dog. The second Ray realized I was headed his way, he hustled up the stairs at high-speed. By the time I reached the bedroom, Ray was walking circles on the bed, searching for the perfect place to plop.
I sighed and approached the bed; a strange noise was emanating from the bedclothes.
Hugo, who had been sleeping cuddled-up under the fleece throw was irately hissing and growling at the large interloper. Ray spun himself into a tight ball and curled up next to the cat, their rumps touching; he, on top of the covers, Hugo below.
I lifted a corner of the fleece expecting Hugo to bolt from his hidey-hole but the cat was not going to give up his piece of prime real estate that easily. I reached a hand under the blanket to pet the brave cat and was surprised by an enthusiastic purr.
I looked at the remaining section of mattress and measured it mentally against the size of my frame.
I squeezed in on my side and reveled in my own little peaceable kingdom.
Thirty minutes later, I was on my way back downstairs to a more comfortable sleeping arrangement on the couch.
Posted by Ray the Blind Dog at 4:10 AM 3 comments:

This morning's comic Rhymes with Orange "The Baked Good Hierarchy." (click on the photo to make it big enough to read the text) 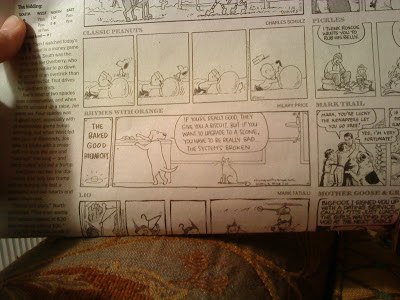 VIDEO ALERT! Ray the Blind Dog as the Perfect Example

I was reading the Wikipedia entry for English Coonhounds (aka Redtick Coonhounds) the other day, when I realized that my dog was THE PERFECT example of everything that they had written about. Obviously, someone that knew Ray had written the entry for the online encyclopedia. Not only was my dog the perfect example of a Redtick Coonhound, but I had the pictures to prove it.
So I did.
Here is Ray the Blind Dog as The Perfect Example.