If you started out reading Ray's blog from the very beginning and knew how...um...interested he was in cats, it's hard to believe that his best friend would end up being a cat. But such is the case.

As his dog friends moved, or moved on to a different plane of existence (died), Ray adapted. He learned to not eat his cat companions and even to enjoy their company.

It helps that Ray's current cats are not afraid of him. Juno knows that if she is in Ray's path, he will step on her so she scoots out of the way. Lionel, Ray's best friend in the whole world, moves for no dog. He waits for Ray to step on him then grabs Ray's foot, or if its close enough and Li doesn't have to exert himself too much, Ray's head. Li sleeps with Ray and eats his food. Juno keeps a motherly eye on both of them, giving them a quick lick every now-and-again. As mothers are wont to do, she anxiously awaits Ray's return from long walks and greets him ecstatically, rubbing along his legs, and tickling his belly with her tail, making her excited little porpoise noises the whole time.

Juno and Lionel love their dog. And Ray, much to my amazement, seems to love his cats. 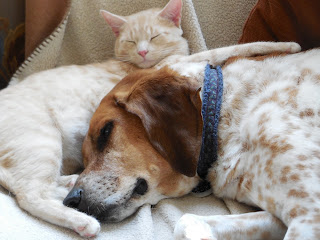