I've never been one for high-fashion, preferring jeans and a t-shirt for almost all major occasions. And if there is a trend, I'm always years behind, first having to mull it over to decide whether or not it has merit. But I think Paris Hilton was on to something with her dog-purse. I'm not sure that it can carry much beyond a cow but it does make me feel ever so fashionable.

Time to Get Up

Something roused me. I looked at the clock on the bedside table and saw that it was 12:45 a.m. I lay still, listening. There was a thud and then a rattle and another thud. I poked Gregg.

"I think there's someone in the house," I hissed at him.

We both lay still listening to the weird noises for a moment which, all of a sudden, sounded like they were coming from right outside the bedroom door. Not wanting to be caught lying down, I slipped out of bed followed immediately by a half-awake husband. I crept to the door and flung it open but saw no thieves-in-the-night. I flipped on the hall light and saw Harvey lying on his side next to the closed door of the linen closet. The edge of the hallway runner next to him was flipped over at the corner. Obviously, he's been playing with a bug, I thought to myself as I looked at the bare floor next to the cat but seeing no bug.

Gregg and I stood and listened but heard no further rattles or thuds.

"It must have been Harvey," I said, then stopped and listened intently; a very faint rhythmic buzzing could be heard in the distance.

"Do you hear that?" I asked Gregg.

We both leaned over the stair railing, listening.

"What is that?" replied Gregg looking perplexed.

"I have NO idea," I said as I started cautiously down the stairs followed closely by Gregg.

When we reached the bottom of the staircase, we both stopped and listened, trying to trace the source of the sound. The buzzing was definitely louder, and it seemed to be coming from the family room. I hit the light switch and looked at Ray curled cozily on the couch, twitching furiously in the throes of a dream. It can't be too bad, I thought to myself, if the dog is still sleeping. 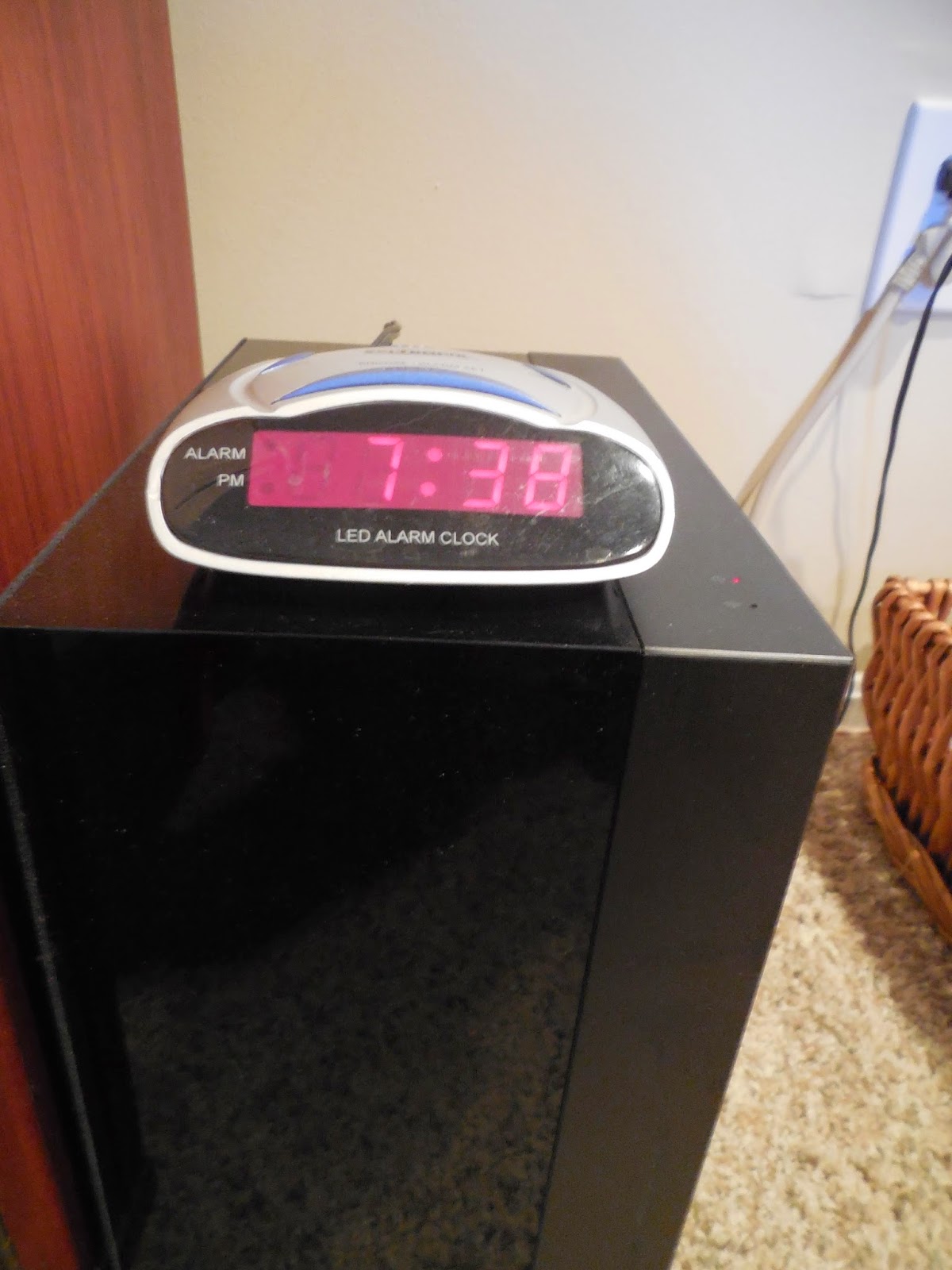 Still mystified, we followed the noise to small alarm clock sitting atop a speaker next to the TV. The alarm function had been turned on, and since neither of us had ever used the clock as an alarm, neither of us recognized the noise.

"How did that get turned on?" asked Gregg incredulously.
"I have NO idea," I responded as I reached over and turned off the clock.*

We returned upstairs to bed. Just as I was pulling up the covers, I had a thought.

"Where's Juno?" I said, thinking that she is usually in the thick of anything that is going on at the moment.

"I don't know," said Gregg as we both climbed back out of bed to look for our pudgy dumpling.

I walked back out into the hallway. Harvey was still lying on his side next to the linen closet door. I reached over and slid open the bifold. Juno strolled out looking like she hadn't a care in the world.

I started laughing, turned, went back to bed, and laughed until I fell asleep.


*We still have no idea how the alarm got turned on. Our best guess is Harvey did it in an attempt to wake us up so that we would rescue Juno.

It was nearing 3:00. I knew this because Ray woke up from a dead sleep and walked over to stand in front of me, whining. I was in the middle of something so I ignored him.

Thinking perhaps that I needed encouragement, Ray went to his toybox, came back with a stuffed floppy thing, and stood in front of me, ears deployed, head tilted, waiting for my reaction.

Still involved, I ignored him.

Convinced that perhaps he didn't have the right toy, Ray returned to the toybox, picked up his stuffed cow and did a turn around the coffee table, enticingly looking over his shoulder.
I sighed, put aside what I was doing, and went to fetch his harness. It was now exactly 3:00, Ray's afternoon walk time.

I laid the harness on the floor and asked Ray to step in. Usually this is enough to get him to drop whatever he is doing and get ready to go. Instead, Ray, with cow in mouth, gingerly stepped into the harness and waited patiently while I fastened the clasps. I picked up my keys, held open the door for the blind cow herder and awaited developments.

Cow still clasped in jaws, Ray pranced into the front yard, the cows arms and legs swinging jauntily. Surprised that the cow was coming with us, I followed Ray down to the corner and around. Out of the corner of my eye, I saw the workmen who had been installing underground cables, point and laugh as the big dog jogged by.

Ray continued down the street and to the next corner and around; I followed, always waiting for the dog to get tired of carrying his toy and drop it.

As we neared Halle's house, a man with a brand-spanking-new puppy in his arms, stepped out of his car.
"Hi, Ray!" he said as I stopped to take a whiff of that new puppy smell.

Getting a good look at Ray and his companion, the man looked at me and mouthed the words "So cute," the look of a twelve year old girl talking about her teen idol on his face. I laughed at the incongruity of a man with a puppy talking about the cuteness of the big hound, but Ray was antsy and obviously on a mission so we didn't linger.

Ray stopped at the next driveway
"They're not home yet," I said of Halle's family as I looked at the lack of cars.

Understanding completely, Ray turned and walked to the curbside lamppost, dropped his cow, and left a p-mail. Until that moment, I hadn't realized that Ray was bringing a welcome-home present to his best girl. I waited until he was away from the spot to pick up the cow. I didn't want to hurt his feelings by telling him that Halle is really only interested in gifts of the edible kind.