Yesterday was Cully's three month anniversary with us. I'd say it's almost as if she has always been with us, but truthfully that new dog smell still lingers about her, and it's a bit of a thrill whenever I take her out for a spin. I think part of the reason the feeling of special-ness remains is because it was just so difficult to adopt a dog in the first place.

So at the three month mark this is what we have;
...a rocket dog who races around the yard so fast that I have to hold my breath while watching her. It is really really really hard to adjust to a dog that can see, never mind one that can see at the speed of light. The paradox is, although she seems to love being outside, she is still mostly afraid to go out alone. The one, single thing that got her through the dog door of death without a person to keep her company, was a probable raccoon in the yard behind us. She spent the better part of an hour jumping up the fence trying to get to whatever-it-was. It was only when she started her basso profundo serenading that I had to bring her in for the day.

...a dog that sleeps as much as the cats. This dog is a couch potato. Unlike Ray who liked his daily game of keep away after breakfast and dinner, and liked to poke around the backyard looking for stuff, Cully likes a nice nap. She also likes a nap after her morning walk. That nap lasts all day until her afternoon ramble around the cul-de-sac with Lionel, quickly followed by dinner and her ecstatic greeting of Gregg as he arrives home from work. All of that wears her out terribly so she needs a nap until she goes to bed.

...a dog who is always excited to go for a walk but, four out of five times, only gets half a block before fear takes over and she wants to go home so that we can drive to the lake. There, she still has fears which manifest themselves in foamy drool that stretches elastically until she shakes her head to whip it off her mouth. More often than not,  all it does is wrap around her muzzle. I bring extra Kleenex with me wherever we go.

...a dog that is pawsy. I'm a third degree black belt and have been punched in the face more by this dog than I had been in 12 years of taekwondo. She would make a great martial artist.

...a dog that doesn't seem to like other dogs. Although we were told that Cully got along with all the other dogs at the shelter and they all liked to play with her, we have yet to find one that she will tolerate. I'm guessing it is part of her fear response. We'll see how this changes over time.

...a dog that has gone from a quivering bowl of jello when any truck went up the street to one that ignores mostly everything but the trash trucks. Those get fearsome growls and barking. Since trash trucks go up the street every single day (some of them before seven in the morning) we are diligently working on getting her to ignore them too.

...a dog that is still trying to get Lionel to play.  Hilarious.

On a side note, I always kind of wondered how many miles I walked with Ray over the years so I decided to keep a walking journal (until I get bored with it). So far, Cully and I have walked 172 miles.

Lionel is one of the stranger cats I've ever owned (I've had cats since I was about 8). He fears nothing, is dumb as a box of highly intelligent rocks, and clearly believes deep down in his soul that he is a dog. But, like people who research their ancestry, find out they are descended from one nationality, and attach themselves to their roots without ever learning a line of their ancestral language, Lionel speaks not a word of dog.

This did not appear to be a problem with Lionel and Ray interactions. Since Ray couldn't see that Lionel was not a dog, Ray obviously thought that Lionel was a dog. Their communication consisted of Ray, every day at three o'clock, standing over Lionel blasting him with the doghorn while Lionel laid there basking in the sound vibrations. Although not immediately apparent to observers why this happened, they both enjoyed this exchange and Ray clearly thought his pack-mate was a very good listener.

Now that he has a new dog, Lionel's lack of language skills has become a bit of an issue. Because Cully can see and wants to play with her new, slightly-odd-looking dog. When Cully goes into a spastic play bow, Lionel arches and puffs. When she butts him with her nose, he bops her. I can see Lionel is very confused by these messages because his other dog never communicated in this way but it in no way interferes with his attachment to Cully. He still wants to go on walks with her (the afternoon walk consists of a stroll around the cul-de-sac with both of them while Juno waits at the end of the driveway watching to make sure everyone gets home safely), likes sleeping with her on the couch in the evening, and doesn't even seem to mind (much) that he is constantly being stepped on by his bigger sister.

As for Cully, she is much better at learning a new language than Lionel. Although she can't actually speak cat, she can clearly understand a few words. When Juno starts making her porpoise noises because there is something being prepared in the kitchen that she is excited about, Cully magically appears. I have every confidence that our new dog will be fluent in cat in no time. If she ever starts to speak it, however, I will immediately be contacting Ripley's.

It's funny how bringing home a new dog makes you think of your old dog. Now that we have Cully, I think of Ray all the time. There is a constant mental comparison going on. Not in a bad way just a "huh" kind of way. Either Cully does something just like Ray resulting in an "Oh, Ray used to do that!" moment, or she does something totally the opposite which makes me think, "Well, Ray never used to do THAT."

Every day, for every tiny detail, comparisons are made. Cully is incredibly excited at mealtime and finishes her meal in a gulp whereas Ray would politely wait just outside the kitchen and then slowly and methodically eat his bowl of gruel. Sometimes he even finished it. Cully looks out windows, which I find fascinating. Ray only ever "looked" out the front door. Cully likes only the couches; Ray liked variety, sleeping on the couches and the chairs and the floor. Cully steps on Lionel without even noticing; Ray rarely, if ever, stepped on a cat. Cully steals fabric softener sheets to roll around on, so did Ray. After a big show of chewing a vegetable, Cully either spits out a big glob of whatever or actually EATS a veg. Ray would never let a vegetable even TOUCH his lips. Cully is unsure around children; Ray could not contain his excitement. Cully is afraid of everything; Ray was fearless. Cully loves her new brain game (Christmas present) just as much as Ray loved his (brain games were his raison d'être).

Then there are the physical comparisons. Cully's ears are longer than Ray's. She doesn't have his stamina. Her voice is deeper and more melodious than Ray's (but let's face it, there will never be another fog horn crossed with a seal). Cully's legs are shorter but somehow she takes up more room on a couch than Ray. Cully doesn't have the dancing eyebrows that Ray had or his head tilt (I really miss these), but she has a tail wag that can't be beat. Cully is paws-y, she likes to touch her humans; Ray was careful where he put his paws.


The comparisons go on and on. I can't stop myself from making them but they make me realize something: We love Cully just as much as we loved Ray. She is more "special needs" than he ever was but it doesn't matter, I am grateful that she is here and that she reminds me every day of our amazing, 'gone but not forgotten' blind boy. 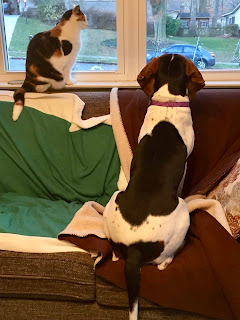