During the month of April, the fun just kept on coming. Niki Moore, Ray's Number One British Fan, came to spend some quality time with her second favorite blind dog and her second-favorite-blind-dog's-owner.

We didn't realize that we had a plumbing disaster pending; we discovered it while I was making dinner on the night that Nik arrived.When the smoke alarm went off. (I'm sure a smoke alarm during dinner preparation needs no explanation). As I went to knock the alarm off the wall, I noticed some brown spots, about the size and quantity of spare change, on the adjacent ceiling.

"Hey, Gregg," I yelled to my husband, "Have you noticed these spots before?"
Gregg and Niki came to investigate.
"I haven't noticed them before," said Gregg, "They must not have been there for very long. I think we would have seen them."

Niki reached up to point at a slight bulge in the paint next to one of the brown spots.
"This looks like a bubble," she said cheerily.
"Well, there's nothing we can do tonight," I said as I went back to preparing dinner, "I'll call a plumber in the morning."

That night, before going to bed, I put towels on the floor under the effected area. (I dismissed the thought of putting out  buckets which can be a bit of a boobytrap for a blind dog.) Thankfully, the next morning, the towels were dry. However, the brown spots on the ceiling were now the size of dinner plates. I called the plumber.

Undeterred and unfazed by the events unfolding inside the house, Niki and I went about the business of having fun. We went to buy a new car.
We took Ray for a walk around the lake.
We hung out on the front porch.
There was a pajama party on the front walkway.


Halle's grandma, Deborah, who is an artist, gave us a painting lesson (subject matter: blind Conor).


We hunted flies…
and made dog-collars for Nik's pack. 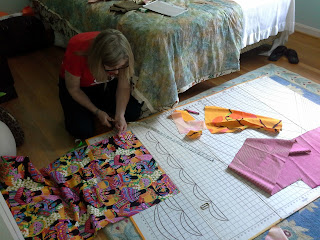 On the day before Niki left, Ray was depressed. Nik did her best to cheer him up by hanging out with him on the stairs.


But Aunt Nik's leaving left a big hole in the blind dog's heart.
Posted by Ray the Blind Dog at 12:15 PM