It always surprises me a little that when a pet dies, the house seems so empty afterwards.

Last week Harvey died. And even though he wasn't a big personality like Juno or Ray, the house seems quieter now and the light inside seems a bit dimmer.

Harvey liked to spend most of his time outdoors. He didn't kill things like Juno does and he wasn't noisy like Juno and Ray. He was our good boy, the serious one who demanded nothing except treats when he came inside for the evening, and who was so OCD you could set your clock by him.

He had four different places that he liked to sleep: in his bed in the bay window overlooking the backyard; on his monkeyfur cloud in the family room; on the wooden bench in the backyard; and in the flowerbed. According to his adoption sheet, Harvey was found in a field when he was a kitten, so sleeping in dirt was in his blood. 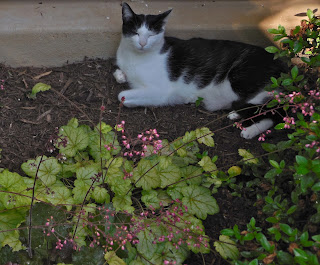 But our Harvey is gone. And the house seems quieter now and the light inside seems just a bit dimmer.
Posted by Ray the Blind Dog at 9:14 AM