Saturday night, a facebook friend of mine posted a link to a dog at the Humane Society. She had "hearted" the posting so I took a look.

It said that the "hound mix" was one of their longest residents but that they didn't know why as she was such a sweet thing. I recognized the photo of the  dog from when I started my search back in April so I knew that she had been there at least that long. She was three and a half years old back then, so close to four now. Nowhere did it say if she was cat-friendly. Feeling rather hopeless but knowing that I had nothing to lose, I filled out the online application and sent it off.

The next day there was a reply. They wanted me to call my vet and give them permission to respond to the Humane Society's questions. They didn't want to talk to a receptionist, they wanted a specific vet name. (I had been to the vet recently and told the receptionists my dog-adoption woes. They assured me that they had my back, then told me a story about a vet that had applied to adopt a cat from a local rescue and had been denied. If a veterinarian isn't qualified to adopt a cat, I don't know who is.)  So bright and early Monday morning I was on the phone to the vet doing as the Humane Society asked. By the end of the day they got back to me with a request for me to make an appointment to meet the dog along with instructions on how to find their farm.

Feeling more hopeful than I had since my third adoption attempt, I went shopping for new dog-walking clothes. I was not quite hopeful enough, however, to buy anything for a new dog. I should have known better.

Gregg and I had a late afternoon appointment yesterday. Last night we came home with a scared girl-hound named Ellie May. Since every girl-hound I have ever met was named Ellie May, we have been calling her Cully. She is totally in love with Gregg. And Lionel is totally smitten with his new dog. 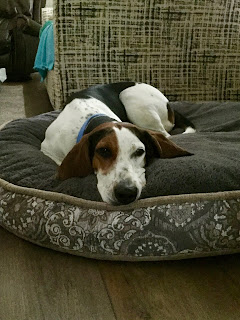 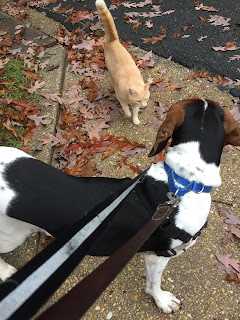 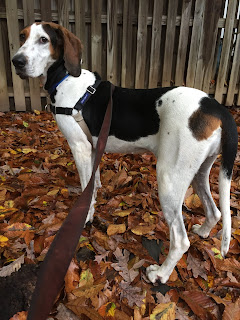