I put Ray in the car to take him to the dog park then went to make sure I had locked the back door of the house (I had). By the time I got back to the car, Ray was in the same precarious position that he was in in the blog Ray in a Pickle. I settled myself in the drivers seat and told Ray if he wanted to ride shotgun he had better hurry up and get seated. Trembling, Ray made his way to the passenger seat and sat looking uncomfortable but ready to go.

I put the car in gear and Ray leaned briefly against the door with his head hanging out the window then tried to curl his lanky frame into a ball small enough to fit in the bucket seat.
I watched him out of the corner of my eye as we drove to the park. He grabbed the handles of a brown paper bag that I had folded and shoved down next to the seat. He nibbled on it briefly then left it and sniffed
around the dashboard closest to him but found nothing to interest him there.
Ray then reached over and started to gnaw on the stickshift. I discouraged that by putting my hand on the stick. Ray rested his chin on my hand but the knuckles weren't very comfortable as a pillow.
Ray then tried to curl up into a tighter ball and when he did, he found the thing that you clip the seat belt into and started to chew on it. 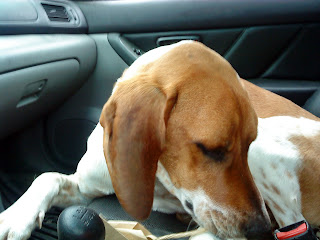 I reached over and told him to "leave it," a command that usually has the same effectiveness as the command "heel." But, being a good passenger, Ray curled as tight as he could and went to sleep.
When we got to the park, Ray awoke and happily unfolded himself from the seat.
I didn't think I'd have to worry about him trying to get in the front seat again. The tall dog didn't look like he enjoyed his cramped experience much.