Ray in a Pickle

On Thursday, I put Ray in the car before I realized that I'd forgotten my purse. I closed him in the back seat and went to retrieve it from the house. By the time I got back to the car, Ray had gotten himself into a pickle. He was standing with his front feet on the center console and his back feet on top of the drivers seat. 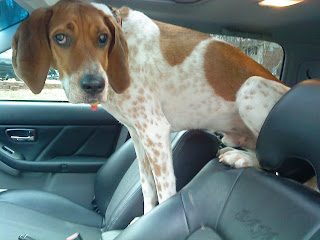 I tried to persuade him to go retreat into the backseat but he was afraid. His back legs were trembling. I tried to lure him into the front seat. He reached out a paw but couldn't feel the seat and was afraid to move forward. 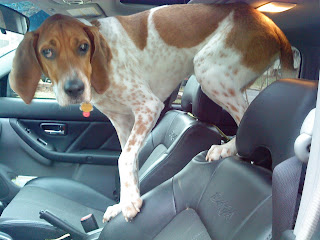 Luckily I had a bag of treats (that I give to the daycare people so that they can feed him tidbits throughout the day). The power of dehydrated chicken livers knows no bounds. Although you can see the concern writ large in the wrinkles on Ray's forehead, he persevered and safely made it onto the front seat. I relocated him to the back and we were off to 'school.' 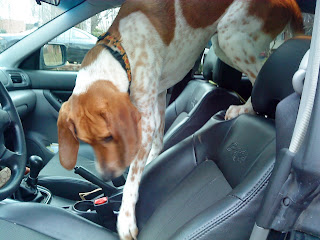 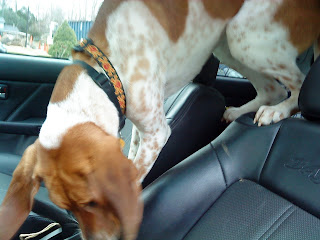 On the way there, Ray again tried to make a foray into the front seat. I put my hand on his chest and tried to keep him in back. He put his nose in my ear and gave it a snuffle then licked it clean, knocking my glasses askew on my face, I was laughing and trying not to get into an accident. I came to a stop light, righted my glasses and tried to heave the dog into the back seat again. Ray was resisting. The light turned green. We made the turn and continued on down the street, Ray standing on the center console, his head thrust forward like a ship's figurehead. At the next light, I grabbed a few more treats and tossed them into the backseat. Ray spent a few minutes searching the backseat for the tasty morsels then settled down for a quick nap before a hard day of play.
Posted by Ray the Blind Dog at 8:16 AM