A Trip to the South 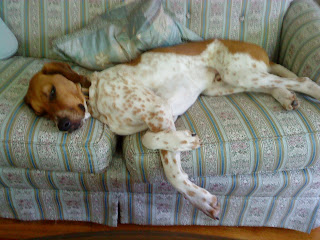 Ray was passed out on the couch, exhausted. It had been a busy couple of days for the blind hound.
My sister Kathy had flown in from Colorado on Tuesday. We had driven to South Carolina on Wednesday (to visit Mom and Dad) and now it was Thursday.
Ray had woke me up at the crack of dawn for a walk down the block. My favorite sister-in-law, Yuko, had come by at 8:00 and taken Ray for a 3 mile run....
Well, I got that far writing about our trip, when I was overtaken by events. It is now almost two weeks later and in that time I have come to realize something: Ray has a much more active social life than I do.
While Ray was in S.C.
While Kathy and I were in S.C.
If life were a popularity contest, Ray would win, hands down.
Ray Runs with Yuko
"He's a good runner," said Yuko after their first morning run. I think it was because the weather was nice and cool and Ray was refreshed after sleeping for about 8 hours on the drive down and another 8 hours overnight. After the third day, "I think he must be tired," Yuko said, "He stopped to sniff a lot."
Ray Runs with Hannah
I have to admit, I felt a bit of trepidation every time I handed Hannah the leash. Ray is a strong dog and Hannah weighs about 20 pounds less than he does. Every time I handed him over I said, "If he starts to pull, let go of the leash. OK?" Hannah would nod and take off at a dead run. I don't know if it's because Yuko ran him in the morning and he was tired or because he knew he was with a six year old, but whenever Hannah took off running down the block with Ray, he would just trot by her side. It was just so cute.
Amber comes to Visit Ray
It was touching to see how excited Ray was to 'see' Amber. His greeting lasted about five minutes and consisted of jumping, tail wagging, licking, and every excited thing a dog does when his person comes home. His grand finale was a flop so that Amber could rub his belly. I would have been jealous if it wasn't so nice to see that Ray remembered his first 'mom' after all this time. I noticed that every time Amber laughed, Ray's head would lift and turn in her direction and his tail would wag. Amber must have laughed a lot when she had him and he must have a lot of good memories about his time with her. 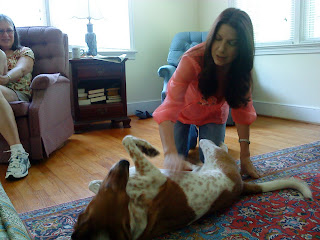 Ray and Amber
Ray's Playdate with Zoe
The first day that Yuko took Ray for a run, she stopped by her friend Haike's house to set up a playdate. On previous trips to S.C., Ray had played with Haike's Golden Retriever, Zoe, in Yuko and John's backyard (to the detriment of Yuko's vegetable garden). This time, Haike had us meet her and Zoe in a grassy, fenced-in area that belonged to the local college (which was not in session).
For the first 10 or 15 minutes, Ray totally ignored Zoe, he just walked around with a strange, stiff-legged gait, sniffing things. "He's just trying to memorize the layout," I explained lamely, embarrassed that my dog didn't seem to remember his old friend Zoe.
Ray's disinterest in Zoe was explained when he finally stopped to poop. You can't play when you gotta poop. Hannah asked me for a bag and went to pick up after Ray (while her mother and I looked on proudly - I don't know any other six year old on the planet that wants to help by picking up dog poo). Ray and Zoe took off running and wrestling. They played for a good long time then did it all again (without the poop delay) later in the week. 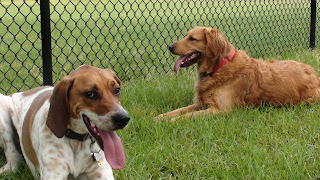 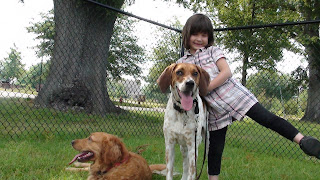 Ray with his friend, Zoe and his cousin, Hannah
Posted by Ray the Blind Dog at 4:32 AM