"You got a package." said Gregg walking up the drive from the mailbox. "From the Royal Mail."
'Royal male?' I thought to myself. 'I wonder which one.'
"It looks like it's from Niki Moore," Gregg continued.
Even more pleased to be receiving a package from a friend than from a random Royal, I took the thing and, followed by my instantly-excited hound, went to sit on the couch to open it. I looked at the unprepossessing package. It was a soft-sided envelope that looked a bit the worse for wear from its trip over the pond. I shook it, but nothing rattled so I assumed everything was intact. I grabbed a corner of the brown packing tape that covered most of the mailer and pulled hard. The very satisfactory sound of package-opening followed.
Ray, who was standing with his head right next to the package, gave a little start at the sound of ripping tape, then got into the spirit of the thing and grabbed a corner of the envelope in his teeth. Using Ray's grip as leverage, I stripped off the rest of the binding. Not waiting for an invitation, Ray excitedly jammed his head into the mailer, flapping his head up and down, trying to find something. He removed his head, took a deep breath and went back in. Still not able to get a good grip on whatever it was, Ray repeated the process, trying to dive further into the envelope but hindered by the sheer size of his head relative to the package. This time when he withdrew, he held a book in his teeth. He spat it on the floor, stuck his head back in the mailer and came out with a package of cookies (Jaffa Cakes!!!!! ). I excitedly took the cookies from him as Ray went back into the package, grabbed something out and headed for the front hall.
"What's he got?" I asked Gregg as I removed another pack of Jaffas from the envelope.
Gregg bent over and looked at the thing in Ray's teeth.
"It's some kind of dog bone," he said.
I picked the book up off the floor where Ray had left it, and withdrew from the package the remaining contents; a handwritten note and a special edition of the "Weekend" section of the Daily Mail featuring the cast of Downton Abbey, a favorite of Gregg's (he'd gotten a late start watching it and had been trying to unravel all the characters). Something for everyone. A warm glow spread through me as I watched Ray trying to unwrap his bone. A surprise in the middle of week from Ray's British buddies. How very, very pleasant. 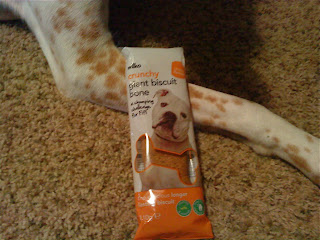