So we hit the road. Kathy and mom were in the front seat and I was in the back with Ray. He's an excellent traveller although we found that, because he can't see, he won't jump up into the car, he has to be lifted, and he won't jump out of the car for the same reason. He is HEAVY. At first, he slept with his head resting on the door but then he turned around and slept with his head in my more comfortable lap. Kath had called Yuko, our sister-in-law, to tell her that we were bringing a blind dog home and to pick up all of my niece's toys so that he wouldn't trip over them. I called her back to let her know our ETA.

"I thought the first time Kathy called that it was a joke," said Yuko, (Phone calls were really flying while I was processing Ray out of the kennel.) "But it's not a joke, is it? I told Hannah you were bringing home a puppy and he can't see so we need to pick up her toys." (Hannah is 4).
"Um," I replied, "He's not exactly a puppy. He's a dog. A big dog."
"How big?" she asked.
I could see Yuko refocusing the picture in her head.
"He's 67 pounds and probably as tall as Hannah. Is it still ok for us to stay with you?"
"Of course! I don't care! I love dogs. John (my brother) says he can sleep on the porch."

We arrived at John and Yuko's in the late afternoon. Ray didn't try to eat my brother so we figured he had no problem with men. Hannah was scared. Ray was ecstatic to meet everyone, especially Yuko. He loved listening to her speak Japanese and would get right up in her face with his head cocked to one side.

We put him in the backyard and I stayed with him while Kath and mom went to buy food, a bed, some toys, and a dog dish. Ray paced and paced the yard until he had it memorized. He had a few accidents - ran right into a trellis that Yuko had rigged up for the zucchini, took out some pots with flowers growing in them, ran into a lot of things scattered around the patio (bikes, baskets, etc.), but he learned things fast and didn't tend to make the same mistakes twice. Hannah watched him for awhile from the sidelines but couldn't stand not being in on the action and was soon walking around next to Ray with her hand on his back, telling him to watch out for things. She would only get nervous when Ray came directly at her, mainly because they were eye to eye and he was really slobbery.

Kathy and mom arrived with the toys and food and we discovered that Ray's favorite game was tug-of-war, probably because it was the only thing he could interact with - he couldn't track a stick or a ball but if someone was on the other end of a rope he was good to go. Yuko called a friend who came over with her golden retriever, Zoe. Ray and Zoe had a marvelous time playing tug-of-war and keepaway and it was the first time we got to hear Ray in full voice. Zoe took his rope and was running away with it. Ray was trying to keep up with her and get his rope back but was having some problems so he started baying. A truly incredible sound.

That night we threw Ray's new bed on the "porch," a largish, tiled room enclosed by windows. Ray immediately settled down on the bed and Hannah pulled up a chair so that she could read him a bedtime story. He was fascinated although it was really hard to tell because his eyes were closed and he was snoring. He slept through the night, and the next morning we hit the road again. 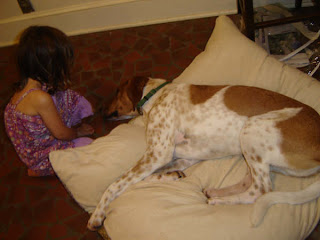 This time we were driving my car, a Subaru Baja. We folded down the back seat, threw in his bed, lifted in the dog and we were ready to roll.
It was an uneventful trip. Like I said Ray is a good traveller. 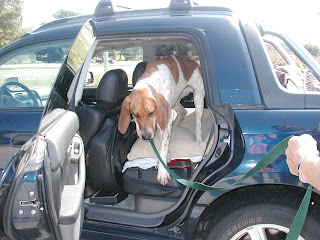