Well, the test results from the vet came back somewhat inconclusive. The nodule on Ray's leg could be a result of some trauma and will eventually go away, or it could be a cyst and should be monitored for any changes. So we will keep an eye on it.

In other news, Murphy, Ray's best friend, got a new brother over the weekend. Ray has mixed feelings about it. He is so happy that Rachel and Josh have adopted a new dog, but he feels as if his status as BFF is in jeopardy. Ray is also very worried about the future of his sleepover parties with Murphy. Older dogs don't adapt as well to Ray's yelling and his habit of canonballing into them unexpectedly; younger ones just accept it as part of the whole Ray package.
So here are a few photos of Murphy's new brother. He is currently named Coke and has had that name for four years. 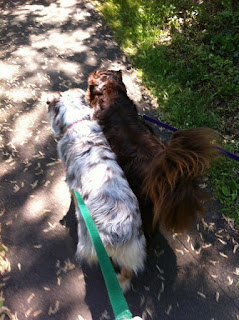