Gregg and I were sitting in our respective spots trying to eat breakfast. Harvey was draped across my lap being petted and purring blissfully. Juno, who had been lounging on the back of the couch behind my head jealously watching her brother, jumped down onto the cushion, climbed onto my lap and sat on top of her brother. Ray was standing in front of Gregg, head down, waiting for him to move so that he could steal Gregg's chair.
"I'm not moving, Ray," said Gregg to the hound.
Taking Gregg at his word, Ray moseyed on over to where I was sitting with the cats. I patted the empty couch next to me.
"Come on, Ray," I encouraged.
Ray didn't move. He wanted my spot, not the one next to me.
Harvey eyed the dog nervously but didn't move either. Having Juno lying on top of him was an effective deterrent to flight.
Ray wandered back to Gregg's chair to see if Gregg had changed his mind. Gregg hadn't.
Not discouraged in the least, Ray ambled back to the couch to see if maybe I had moved in the last minute. I hadn't.
I patted the couch next to me again.
"C'mon Ray," I said to the wandering dog.
Uninterested, Ray went back to Gregg who just shook his head and said "Unh uh."
At this, Ray headed for the front hall. I knew what he was going to do.
"Now he's going to get into something to get some attention," I said to no one in particular.
Ray disappeared from view. I heard shoes shuffling.
"Gregg, are your new boots over there?" I said to my lovely husband.
Gregg screamed and jumped out of his chair. Ray dropped the new boot and started back to the living room.
No fool, Gregg quickly sat down again.
I patted the couch next to me.
"C'mere Ray," I said to the not-quite-clever-enough dog.
Ray stopped in front of me but disdained the spot I was offering. Knowing what I had to do to get some peace, I held on to my lapful of kittens and tried to scoot over without disturbing them, but the cats scattered. Ray climbed up onto the pre-warmed cushion and made himself comfortable. Juno returned and curled up on my lap. I shifted her over to lie on Ray who gave her a vigorous ear-washing, Juno took it as long as she could then 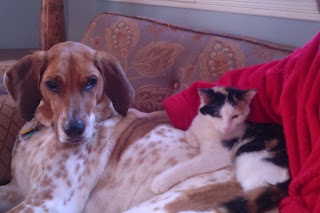 got up to reclaim her lap. Ray put his head on the pillow along the arm of the couch and sacked out. Juno stretched out and closed her eyes. Harvey was nowhere to be seen.
All was quiet.