Mornings; not what they used to be.

I was sitting in Gregg's chair, reading the newspaper. The cats were tearing around after each other. Ray was standing morosely in front of me. He wanted my spot. I sighed. Since I hadn't made my breakfast yet, I knew Ray would eventually get my chair anyway so I stood and went to the kitchen. Just like Lucky Charms, the two cats magically appeared.
Harvey is a winder. If he thinks food is involved, he winds between any legs available, purring and making tiny cat sounds. It makes food preparation a treacherous business. Juno is a lounger, she picks an inconvenient spot, usually in front of the refrigerator, but sometimes in front of the sink or stove, and splays out, waiting for food to drop.
I prepared my toast and cup of cranberry juice and gingerly headed to the couch, Harvey still winding my ankles. Juno followed.
I placed my juice on the end table, sat, and reached for the newspaper. Harvey jumped up on the arm of the couch and stuck his head in my glass of juice.
"Hey!" I exclaimed, knocking his head out of my glass, "That's MINE."
Willing to yield the juice which he didn't want anyway, Harvey turned to my plate of toast. I saw where he was looking and raised my plate high but not quite high enough. Harvey stood on his back legs and hooked one paw over the edge of the plate trying to drag it down.
"HEY!" I yelled again.
I pulled the plate away and the cat, who was still balanced on the arm of the couch, fell to the floor.
Satisfied that my food was now safe, I started eating and turned back to the newspaper.
Leaving it resting on the cushion beside me, I read an article on the front page then opened it up to find it's continuation. Juno, lover of all things 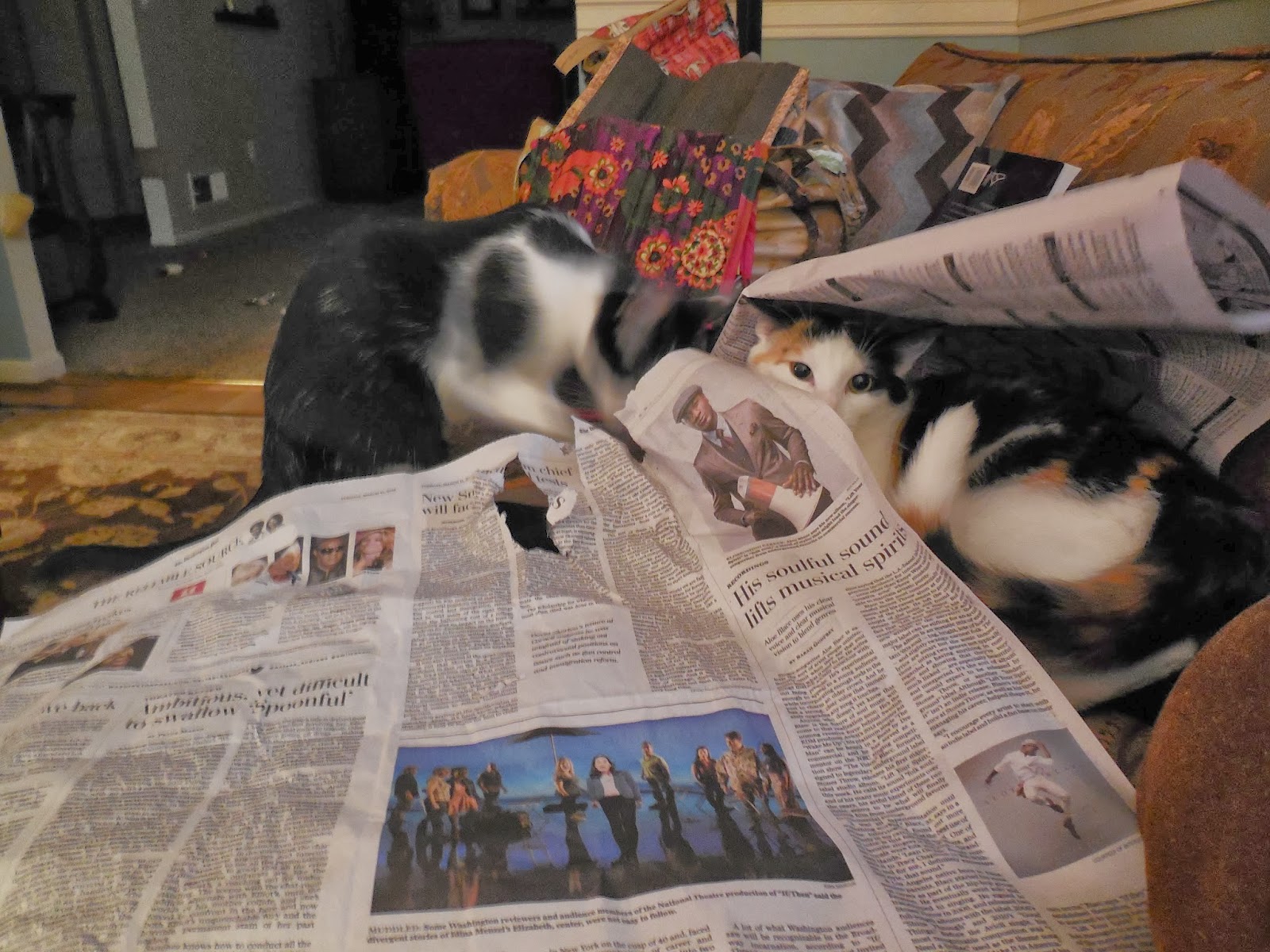 paper, leapt into the middle of it and tore into the article I was reading. Harvey joined her; a wrestling match ensued.
"Hey!" I yelled, "I was reading that!"
Listening to all the commotion and no longer able to contain himself, Ray sprung from his chair to help me get the pesky cats under control.
Juno watched him race by then continued her assault on the newspaper. Harvey squirmed himself under the couch, then as the Ray circled back, stuck his head out to watch. I could tell he was considering a whack at the dog from the safety of his hiding place.
I left the restive animals and went to put my now empty dishes in the kitchen. When I returned, Ray was just curling back into a ball on Gregg's chair. Juno had abandoned the paper and was on the chair on the coffee table quietly grooming herself.
I smiled at the serene scene and walked to my spot on the couch. There was a sharp pain in my toe. I screeched.
Ray jumped from his chair to help. Harvey disconnected his claws from my sock and raced out from under the couch. Juno jumped from her perch and took off after him. Ray took off after the two of them.
I sat back down on my spot and picked up the shredded newspaper.
I sighed.