Ray and I were tired this weekend. We didn't do much but take walks (both), sleep in the sun (Ray), and chew on a marrow bone (Ray). Frozen marrow bones are worth their weight in gold to a blind dog. Better than a kong, it keeps Ray busy for hours. This morning while we were eating breakfast, I gave Ray a marrow bone, and a couple of hours later, he was still working on it. Gregg and I were undisturbed while we read the paper and relaxed.

Yesterday, Todd came by with Sasha and his nephew, Jake. Ray, as usual, was totally excited to be around a little boy (Jake is four and a half) and was lunging a bit and trying to nibble on Jake's shirt. I gave the spritzer to Jake and told him to use it if Ray tried to jump on him. Jake, who was unafraid of a dog easily as big as he was, willingly took on the task of correcting Ray and managed to keep him under control. Every time he spritzed Ray, Ray would flop and expose his belly and Jake would rub Ray's belly as reward. Worked well for everyone.
We all took a walk around the block and Jake told me about his "Basket Hound", Polly, a dinosaur bone that they had found, his dog that had died a year earlier (he told me it was very sad), and a whole bunch more. He was very interesting to talk to, had a good sense of humor, (which was unexpected in a four and a half year old). He laughed when I told him that Ray liked to eat little boys. I thought Jake was really smart.
We stopped by Todd's and I met Jake's brother Brody, who is two. Brody also wanted to get in on spritzing Ray. He didn't completely understand the concept of correction but the water bottle was fun. We all had a good time.

I had just finished posting the above when I heard Gregg yell from the front porch, "There's a lost Basket Hound out here!" (Gregg had met Jake the previous day also). Gregg came in and grabbed a leash. I put the computer up and followed him outside.
Gregg was clipping a leash onto a CHUNK of a dog.
"Where did he come from?" I asked.
Gregg pointed up towards the end of the cul-de-sac and said, "From up there."
"There are two Baskets that live next to Halle," (they will forever be Basket Hounds to us) I said, "I think they live behind the house at the end, I'll take the dog and go see if they are missing one."
"I'll start dinner," said Gregg.
"Great," I replied, "Come on Chunky."
I pulled on the leash. Chunky followed happily.
We made it most of the way to the Basket's house when Chunky pulled a Gandhi.


What is it with these hound dogs, I thought to myself. I had stuck my phone in my pocket when I left the house thinking that maybe we could call a number on the dog's tag but there wasn't one. I pulled it out and called Gregg.
"She (it was a girl dog) won't move," I said, "She's pulling a Gandhi. I'm only about four or five houses away. Can you come and either hold the dog or go to the house and see if it's their dog?"
"I'll turn off the stove and be right there," said Gregg.
Chunky had laid down on my foot. She rolled over so that I could rub her belly. I rubbed her belly and waited a couple minutes for Gregg expecting that he would be walking or riding a bike. He had the foresight to bring his car.
I left him holding Chunky while I walked quickly up the street to the Basket house. When I knocked on the door I heard two dogs start to bark. With a sinking feeling I waited for the owner to answer.
When the woman came to the door I asked, "You're not missing a dog are you?"
"What kind of dog?" she asked.
"A Basset." I replied.
"No," she said, "But there's a family up that street that has four of them."
She held up four fingers and made a very expressive face.
"Ok, thanks," I said.
I knew the house. The dogs always bark at Ray and me as we walk by. I ran back to where Gregg and Chunky were sitting. Chunky got up to greet me when I got there. I told Gregg I was going up the street and asked for his car keys, it would be a lot quicker.
I drove to the house with the four Baskets. I pulled in the driveway and turned the car around just as an SUV pulled up and into the driveway. A woman got out.
"Are you missing a Basset?" I asked.
"I don't know," she replied, "I just got home. Let me ask."
There was a young man in the backyard.
"Are all the dogs accounted for?" she asked.
He nodded.
She turned to me and said, "If you go up there and across, there's a Basset in the house on the corner. I'd go with you but I've been at a ball game for the last five and a half hours and I really gotta pee."
"No problem," I said, "I'll find it."


I got back in the car and went to get Gregg and Chunky.
I told Gregg what I found out.
"See if you can get her in the car," I said.
Gregg lifted Chunky into the back seat and we drove down to where the woman had told us. Gregg went to the front door while I got Chunk out of the car. The dog walked up to the door wagging her tail. 'This is hopeful,' I thought.
A woman answered with a pug at her heels. Wasn't her dog, never seen it before.
I told Gregg I'd seen a Basket on the next street over at the corner of a cul-de-sac. I told him I would walk Chunky up this street, if he would go and see if they were there. He took off in the car. Chunky and I walked to the end of the cul-de-sac we were on. There was a woman with a dog.
"Have you ever seen a Basset around here," I asked her.
No.
At this point, Chunky decided she wasn't moving, no matter what. I waited for Gregg.
"I found a guy on the next street over," he said, "but he didn't know."
"Let's go home and call animal control," I said, defeated.
I'd run out of Basket Hounds.
We put Chunky back in the car. She was happy to have a ride and was trying to get in the front seat.
When we drove up our street, I said, "Pull up to Charlotte's, I'll see if she's seen any Baskets while she walks Casey (the King Charles Spaniel). Go ahead and take her home and put her in the backyard for now."
Gregg assented and I went to talk to Charlotte. She didn't know any Baskets.
While walking back to our house I thought I'd stop by and see if Sandra had seen any Baskets while walking Maddie. I noticed that the car wasn't parked out front and realized they were out to dinner.
I crossed the street and went through the house to the backyard. Ray was in heaven, yelling at Chunky on the back patio.
"Charlotte didn't know any," I said. "I went to talk to Sandra, but she wasn't home."
"Their car just pulled up," said Gregg.
I went across the street as Sandra was getting out of the car.
"Do you know any Bassets around here?" I asked, and added "A small, fat one."
"Next door," she said, "They just brought one home today. Dick (her husband) saw it."
We both looked at the house. No one was home.
I yelled to Gregg, "Next door! It belongs next door!"
I walked to our yard. Gregg hooked Chunky up to a leash, walked her across the street, and let her into the backyard of the house next to Sandra's.
Ray was standing at the front door when I walked into the house.
"What happened to your toy?" I asked Ray, referring to the 'lost' dog.
I glanced over at the couch and saw my "knitting." It was just a tangled heap. The same ball of yarn that I had detangled the weekend before. It still had the needle attached with the 2 inches of progress that I had made since then. I had left it on the widow sill behind the couch when I got up this morning thinking that I would have some time to work on it.
I sighed.
Gregg came through the door holding the empty leash.
"So. What kind of pizza do you want?" he asked. 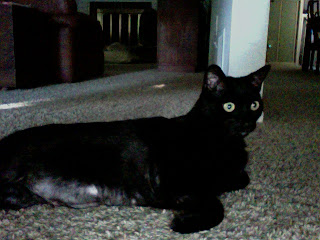