I know I'll regret this later... 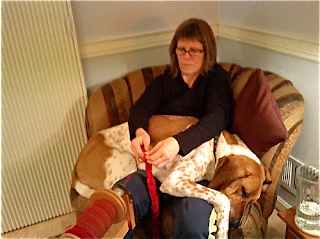 Lately, I've been spinning again. I doubt if I've done any spinning since this photo was taken, mainly because Ray was just such a yarn hound.
But now he's older and wiser and doesn't really bother my stash of yarn and roving anymore. So, I've been easing back into knitting little things, and then, this week pulled out my wheel to start spinning again.
The first bag of roving I pulled out of my stash turned out to be faulty. I'm not sure where I obtained this bag, but the wool in it was already felted. The process of felting wool welds the fibers together into a mass, and there is really nothing that can be done with a ball of felted wool. I thought briefly of inventing a way to use it, but then I did the only thing that really made sense to me. I tossed it to Ray.

Like I said, I know I'll regret it later, but I just had to do it.