The campaign manager's last job was completed late last night. She is now ready for her trip abroad to visit Ray's Number One Fans in England 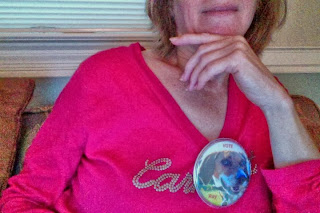 Knowing that it would be much easier for Ray to stay in familiar surroundings while we are away, we decided to get a dog sitter. After much searching, we hired a professional from Pooch Pals, LLC, to come in and take care of Ray and guard the house. Bryan, a former Marine and a current student, is co-owner of Pooch Pals, LLC, and very well-suited to be a general factotum and bodyguard for the current candidate for Governor of Virginia.
Ray actually did the choosing. From the moment Bryan walked through the door, Ray was doing his dance of pure joy. It took him at least 10 minutes to calm down enough for Bryan to get past the front hall and into a chair. While Ray continued to try to lick Bryan's face, I gave Bryan the third degree, gave him a briefing on How to Tend to Blind Dogs, and then tried to rattle him by telling him that all the neighbors would be keeping an eye on him because everyone knows Ray. Being a former Marine obviously worked in Bryan's favor. He remained un-rattled, even when I told him that he would have to walk Ray three miles every day, keep up Ray's blog, and Skype with some strange Britishers that wanted to keep an eye on him from across the pond. Bryan even agreed to pet Chester everyday and let Ray outside to lick Chester's ears. Overall, a very accommodating young man.
Bryan has carte blanche to take Ray with him when he walks other dogs (Pooch Pals does dog-walking and dog-training) and to take him on field trips. However, Bryan doesn't know yet that I have a campaign button waiting here for him. I think the extra exposure will be good for the candidate.