We'd been at mom's for five days and Ray was bored. And, when Ray is bored, everyone knows it.
John, Yuko, and Hannah had come over for dinner and we had just sat down when Ray started pacing and whining. I knew the meal was going to be good, because I had tasted it while I was cooking it, and I didn't want to be distracted while enjoying the organic lamb with artichoke hearts and leeks. So I clipped Ray to the retractable leash, let him out the back screen door, and closed the screen with the bulky handle part inside the house and Ray outside. I figured he could wander for 18' during the 15 minutes it would probably take us to eat.
Hannah finished first, went to the back door and said "I'll watch Ray." "That's a good idea," I replied, "Thanks, Hannah."
It couldn't have been five minutes later when I heard a zzzzzzzip, CLUNK. "Ray got away!" Hannah shouted. I yelled an expletive and bolted from my chair, through the kitchen, and out the back door. Ray was trotting through the backyard prancing this way and that in his random way. I called to him and he paused briefly, just long enough for me to nab his collar and lead him back into the house. A bit of leash was dangling from his neck. He had a look on his face that I hadn't seen before. He looked proud. He had figured a way out of his incarceration by leash. A couple of quick chews was all it took. I snapped a few photos. 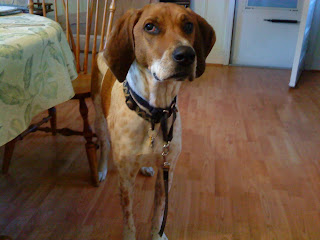 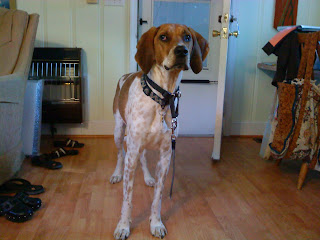