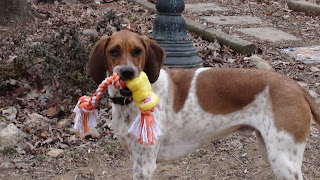 See what I got for Christmas
Christmas eve was hard. Ray stood in front of the front door, his head hanging down to his ankles, almost all day. I just knew he was waiting for Santa to come (or maybe Murphy). He didn't whine or anything. He just stood. It was hard not to feel bad for him. But, he had to wait just like every other kid on the planet for the actual DAY to arrive.
Christmas with Ray was fun. It's like what I imagine Christmas to be like when you have little kids but without the crying jags and sugar induced frenzy.
We started our day off with scrambled eggies and bacon (Moonie and Hugo just had bacon and a little whipped cream) then headed to the tree to open presents. As per last year, Ray was EXCITED. He is very adept at opening presents (it must be a hound dog thing), and even likes to use his teeth to pick off the plastic shrink-wrap around things. Gregg was good about taking the toys away and removing the plastic before Ray could actually swallow any of it. It didn't look like he had any intention of doing so, but I also thought the glass ornaments were safe, until last night when he nipped off a rather gorgeous blown-glass partridge with a feather tail. We found it crunched up outside on the patio.
I took videos while Ray opened all his presents. If it was something particularly exciting, Ray would start a game of keepaway. The same as last year, Ray took one of his presents outside and buried it. We're not exactly sure what it was. He ripped off one end of the wrapping paper and immediately took off for a couple laps around the coffee table, then tried to head outside. Unfortunately, the present was a bit bigger than the dog door opening. He tried twice to get it through before we opened the kitchen door to let him out. Ray joyfully ran around the backyard with it a couple of times, the green christmas wrapping paper flapping about his face, then buried it good and deep next to the compost bin.
After Gregg and I opened our presents, Ray and I headed off around the cul-de-sac to deliver homemade dog biscuits to some of his friends, then back to the house to collect Gregg so that we could go for a walk around the lake. Then off to Just Fur Pets to drop off some gift cards for the great young people that take such good care of Ray while I'm at work. (It must be hard to leave your family on Christmas to take care of other people's dogs.) Then back home to hang out for awhile before Murphy came over to run with the big dog. They played until it was time for Gregg and I to go meet friends for dinner. (yeah, I know, beautiful new kitchen and they go OUT for dinner? we just ran out of time this year. the construction set us back with decorating, shopping, cleaning, and everything else). One by one, all the presents that Ray got for Christmas headed through the dog door and out into the dusty wasteland that used to be the backlawn. Ray was trying to get Murphy to play tug-of-war or keepaway but she was much more interested in catching squirrels. So Gregg got involved and showed her how to do it. 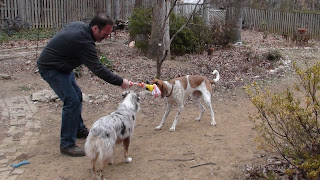 See Murphy, you take the rope and pull 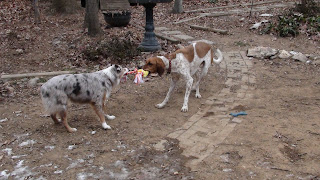 Later in the evening, after we returned from dinner, Josh came over with Murphy and his (step) father-in-law, Brian, in tow. While we sat and had cocktails, the dogs ran and played in the backyard, then in the living room and front hall. Murphy became an impromptu Christmas tree when she reached under our tree and retrieved an empty cat food can. (It had mysteriously disappeared from the counter after I had fed the cats earlier in the evening.) When she backed out from under the tree, she was festively sporting an ornament, its hook firmly caught in her shoulder fur.
Ray became extra cautious and protective of his rawhide bone while Murphy was in the house. Her favorite game is to grab it and keep it away from him. So Ray uncomfortably and anxiously stood guard while she paced around. He wouldn't leave his post until I dragged Murphy up on the couch next to me. She settled down with a sly grin on her face. Only then did Ray come over and climb up on the couch next to Josh. Murphy gave him a few minutes of quiet then jumped down and headed for the bone. Ray spastically ejected himself from his comfy spot to try to intecept the little marauder. Josh got Murphy to come back to her spot and I convinced Ray to do the same. As he walked by Josh's empty glass of Scotch, Ray took a few quick swipes of the inside of Josh's glass with his tongue. Later in the evening, he did the same thing to Brian's glass of Scotch. Ray was apparently in an extremely festive mood.
I hope all of Ray's fans have a happy and safe holiday season. We look forward to seeing your comments in the coming year.
jean
Posted by Ray the Blind Dog at 7:34 AM