Two whole days without blogging! Wow. It's not like there wasn't anything to say. But really, there wasn't much. It wasn't a "two egg" day but more like a gimpy chicken kind of day - a fact that Orwell included in his diary, listed among other mundane events that happened one day when he was in N. Africa.

Ray has been pretty good lately. There was the roll of paper towels and the box of kleenex and the pepper grinder and the bag of grass clippings but mostly Ray has been a good boy.
I worked yesterday, Gregg took over watching the dog.  I felt like a new mother getting the day off from a toddler. Relief at not being totally responsible for another being for an entire day. Apprehension that Gregg wouldn't enjoy his day off with the new dog. Joy ( I hate to admit this) that for a whole day Ray was someone else's problem (even if I did have to go to work). But at the end of the day, you can't wait to see your kid. No matter what.
So when I walked into the house and saw yarn scattered from one end of the living room to the other, I just laughed. You gotta have your priorities. And at the end of the day, my priorities are:
When I turned 40 (ish), I went back to school to get a degree in Horticulture. In my class there was a woman who was talking about getting rid of her dog because it had dug up one of her favorite plants. I was appalled and confused. How could anyone believe that a plant was more important than something that breathed, and depended on you, and loved you no matter what? Especially when a plant was SO replaceable. Go to the nursery, get another one. Problem solved. But to replace a living, breathing thing, something that had a personality and a NAME for God's sake - to replace that with a PLANT!??? What's up with that?
The problem arises when you have competing "things that breathe". How do you prioritize? Obviously humans have to take precedence over animals. But when you get down to cats that you've had for seven or so years and a dog that you've had for 30 days? What do you do? How do you make sure that you aren't minimizing the needs of one over the other.
Anyway, I digress. None of the yarn in the hallway was really damaged (except for the ball with the Australian Possum in it. Gotta look that up, what the heck is an Australian Possum anyway?), so I just rolled up the stuff that had been unrolled and jammed it back into one of my knitting bags. It was my fault anyway for leaving it on the back of the couch.
So at the end of the day, it sounded like Gregg and Ray had had a perfectly good time, and I was relieved and happy. Progress was still being made. Gregg even gave Ray a new toy, an empty Perrier water bottle that made a particularly interesting squeaky noise when Ray chewed on it. (The Deer Park water bottles don't sound nearly as good. Ray abandons those after about 3 minutes).
So this morning I took Ray for a walk before I took him to daycare. As a first-time mother of a toddler, I have to admit, I'm tired. I should have had him before I turned 50. When we got about 3/4 of the way around the block, we ran into Halle (the Greyhound) and her mom. Ray is still trying to impress Halle. Halle is still not having any of it.  Halle's mom asked me where we lived because one of her neighbors asked her if she knew where the dog was that was barking because it sounded like it was in "distress." She told her neighbor that it was just Ray and explained about him being a hound (bless her). I explained about Ray's habit of announcing things (he did it the minute Gregg walked in the front door today - Ray met him at the door, then ran out the back door and around the yard yelling like crazy. It has to be flattering), and made a mental note to try to get Ray to minimize announcements.
Ray was really tired when I picked him up from daycare. He was actually napping when I got there.
"Ray had a lot of fun today," said Kristen, one of the doggie daycare staff.
She was smiling broadly when she said it, and I wished that they had a video hookup so that I could see what was going on during the day.
I took Ray home and it wasn't long before he was asleep. But not quite asleep enough to miss Sasha walking by the house. I took him outside to see his friend. He loves to bite her fur. Todd (Sasha's person) said it must be like biting a big, stuffed animal. Sandra (across the street neighbor) came over with Maddie (Cocker Spaniel) and we all had a good time.
Maddie is a perfect lady compared to Ray and his girlfriend. Maddie always sits down if Ray or Sash try to sniff her butt. Then Ray will grab Maddie's leash and try to drag her away from Sandra as if to say "Come on baby. Come away with me and I'll show you how to have fun." But at the end of the day, Sasha is the only one who understands Ray. 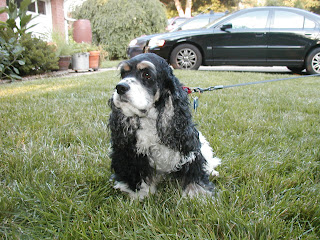 Maddie
Posted by Ray the Blind Dog at 4:43 PM