I left Ray outside because I knew I was only going to be at work for a couple of hours but I didn't trust him to be inside alone that long. It was supposed to rain, so as a precaution, I called my neighbor across the street and asked him to let Ray into the house if storms rolled in.
I had more work than I expected when I got to the office. I asked one of my office-mates to keep an eye on the weather (I don't have a window) and let me know if she saw any threatening clouds so that I could leave if necessary. Just before one o'clock she ducked into the office and said things were looking a little iffy outside, so I shut down my computer and headed home.

By the time I got there, the storm threat seemed to have diminished so I decided to take Ray for a walk. We headed towards the lake. I wanted to see what Ray would do around a body of water.
The little lake has a boat landing. At the landing there was a couple throwing a toy into the water for their golden retriever. I took Ray down to the water's edge just as the dog was going in. Ray looked confused when he heard all the splashing and started to back up. When the dog made it to shore, he headed right for Ray. Ray not knowing what the heck kind of Loch Ness monster was coming at him became alarmed. The dog sniffed Ray, who was trying to back out of his collar, then shook himself dry and caught both of us full-on. I laughed, but Ray was not amused.
We headed to the path around the lake. I became aware pretty quickly that the responsibility of leading a sight-challenged dog on a trail was much greater when there were obstacles everywhere. One side of the path was edged with landscape timbers then sloped down steeply. Tree roots and large rocks jutted out of the dirt. One section of the trail had landscape timbers inserted across the path, at intervals of about three paces, to form a staircase leading up. I thought briefly about turning back and taking the opposite direction which is an easier way around the lake, but I didn't know how long the weather would hold. So Ray and I forged on.
Ray was staying petty close to heel, probably because the lighting was dim in the woods and he couldn't see as well. Every time we came to a step, I stopped and said "Step UP." Ray managed very well.
We went a little farther and came to the same type of setup going down. Crap. Ray doesn't do as well going down. It's a pretty good leap of faith to put your foot down when you can't see bottom. Luckily the stairs were mostly shallow and when Ray put out a foot, he could feel the ground.
I did the same thing for the down steps that I had done for the up steps. Stop. "Step DOWN." The last step was the steepest, Ray couldn't feel the bottom by putting his foot out and bending his knee but with a little encouragement he made it. Thank God Ray is such a smart, brave dog.
Our next obstacle was a narrow footbridge with no railings. It crosses a muddy ditch only about a foot below. Not far to fall, but I wanted to get Ray home without him being traumatized. I took in the leash and said "HEEL" most authoritatively. Shaking a bit, Ray took on the little bridge and pranced as soon as he made it across. He felt GOOD.


The next (and last) obstacle in the course was a larger bridge with railings. It was occupied by three boys fishing. I stopped at the bridge and tapped it with my foot so Ray knew something different was coming. I shortened the leash and we stepped on. He was creeping a bit so I gave him a bit of encouragement, told him what a good dog he was, and that everything was fine. The boys wanted to know if Ray was afraid of bridges. I told them that he was blind and that all he knew was that it was something different (he probably sensed that I was nervous). They all were encouraging Ray and then let him smell them.
It was the first time Ray hadn't tried to jump up on someone when meeting them. He did however try to eat one of the boys' shirts.
"You smell like food," said one of his friends.
The boy was delighted to be singled out.
Ray and I made it as far as the neighborhood pool, which is about 3 blocks from our house, when it started to rain. It was just sprinkling and there wasn't any thunder so when two girls in bathing suits started cooing to Ray, we stopped so that they could pet him. Ray did his usual lunge and I told the girls not to move while I tried to get Ray to sit. He tried really hard but it was just too exciting. As usual the girls loved him. Ray makes friends wherever he goes. 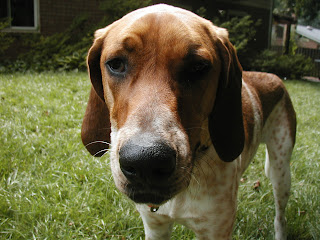 Ray in a very Unflattering Pose
Posted by Ray the Blind Dog at 1:23 PM