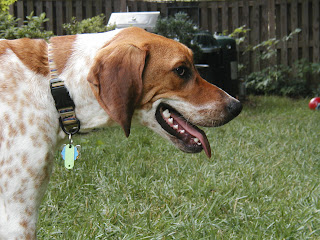 Yesterday when I dropped Ray at daycare, Donny, the morning guy, put Ray into the grooming pen with a bunch of little dogs. The pen was occupied by a pair of dainty Italian Greyhounds, quite a lot of mixed parentage pooches, Ty and Bear brother Schnauzers (those two are always there), and some dogs that I recognized as pure-bred-but-I-couldn't-tell-you-whats. There were also a couple of Shih-tzus cowering and shaking in a holding area between the pen and the store.
"I put them in there so that they can get used to the place a little before I turn them in with the other dogs," said Donny.

The usual sniffing took place then Ray picked out the dog he wanted to play with, a shortish, longish, chubby black/brown/white dog with somewhat bulging eyes, and started yelling in the dog's face. The dog looked slightly taken aback and swerved a bit to get out of full blast of Ray's voice. Ray found the dog again and yelled some more. I looked over at the cowering Shih-tzus, and to my surprise, they were both standing, wagging their tails, and looking at Ray. Obviously, this yelling tactic works well with some dogs.
Donny went to the holding area and opened the gate to coax the dogs out. They nervously paced back and forth. One of the Italian Greyhounds tiptoed in and tried to convince the two little dogs to come out, showing them the way back through the gate. The Shih-tzus were thinking about it but not quite ready to venture forth. I figured a couple of more blasts from Ray's foghorn and they'd be out there with everyone else. I didn't have time to see the end of the play and hit the road.
Going to daycare to see the dogs interact (even if it's only for 5 or 10 minutes) is one of the high points of my day. It's just SO interesting. What is in the scent of a dog that makes Ray pick one over all the others? What is Ray saying when he yells in a dog's face? What makes some dogs so happy to be there and others cower in fear? I kinda wish I had a job at the daycare so I could see all the interactions that go on, but frankly, I think the noise would get to me.
Posted by Ray the Blind Dog at 4:02 AM