Halloween is my favorite holiday. Gregg's too. We love giving out candy to kids and we love costumes. I like to decorate and Gregg likes to help out and to appreciate the decorations. I love watching kids run their hands through the candy, letting it drop through their fingers like it's gold and they're pirates. Now I have something else that I like about Halloween.
Y'know those people out there that dress their dogs in stupid clothes? I became one of them yesterday. I decorated my dog in a costume.
I've been giving a lot of thought to Ray and winter here. He has to be exercised because of his bum leg and I've been wondering how he's going to do in "weather." He's not really getting a winter coat and I saw him shivering when we had a cold spell a couple of weeks ago. So I decided Ray needed a raincoat. So I made him one. With a lining. While I was sewing it, I realized that the lining reminded me of a famous sleuth. Since the fasteners on the raincoat are velcro, the coat is essentially reversible. I put it on Ray and, like the chameleon he is, he immediately took on the characteristics of the sleuth. An hour or so later and I had a hat to match.
TA DA! Here he is --------- SHEERLUCK HOUND 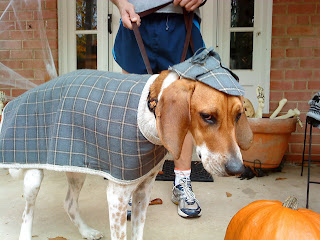 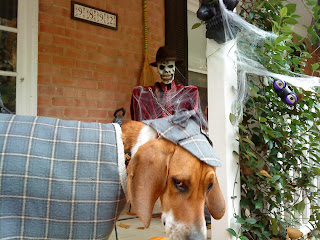 Although he didn't try to rub it off or anything, Ray wasn't crazy about the hat so we just left it on for the photos. Then we walked across the street and up the block to do some trick or treating at Ray's friends' houses. He got biscuits. 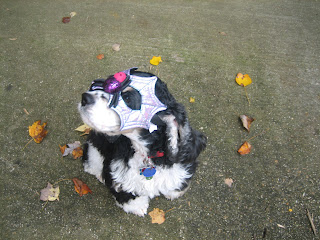 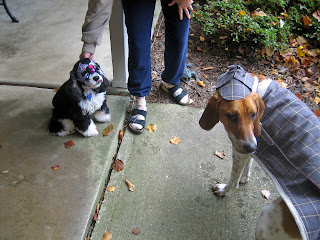 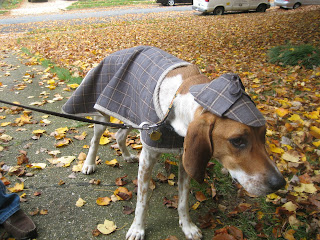 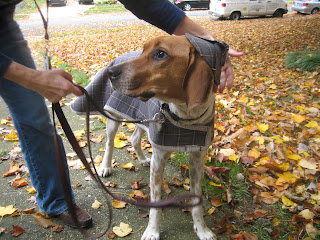 (He seemed to like the coat just fine, which was a good thing. It was pouring rain this morning so he got to try out the raincoat side - worked like a charm).
That evening, by the time trick or treating started, Ray was already in bed. The first time he heard a knock at the door, he jumped off the couch to see who it was. I clipped on his leash and Gregg distributed candy through the screenless door (we remove the screen from the storm door - it's a lot easier to give out candy that way). "Does anyone want to pet the blind dog," I asked? I held Ray's front legs up so that his head cleared the screen protector which was still in place. Ray got petted then returned to his spot on the couch. For the next hour, a knock would be heard, Ray would jump down, we'd clip on his leash, hand out candy, then ask if anyone wanted to pet the blind dog. Some kids would, some wouldn't. Every time, Ray would return to his place on the couch. After about an hour, every time he laid back down he'd give a groan. After an hour and a half, he'd think for a minute about whether he wanted to jump down and answer the door. After the second hour he decided he'd had enough. There was knock on the door. Ray raised his head, looked over his shoulder, groaned like an old man, put his head back down on his pillow and gave a deep sigh. He didn't move the rest of the evening. 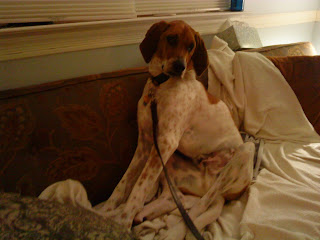 Ray after getting back on the couch but hearing more
kids coming up the walkway. He knew he was going to have to get up again but he was really getting tired at this point.
Posted by Ray the Blind Dog at 9:06 AM