Ray Meets One of His Own


Ray and I were walking around the lake. We stopped to talk to a woman with a newly-rescued black Lab. She had had him for only a month and a half. "He's a great dog," she said. "So good in the house. Really well trained. I can't imagine why someone wouldn't want him." The woman told me that the Lab was on death row at an animal shelter when she adopted him.
(I can't imagine why people pay for dogs when there are so many great dogs to be had for free. (Ray being a PRIME example, blindness and lack of lymph nodes notwithstanding.) And not just mixed breeds are available but purebreds of every kind. It just boggles my mind.)
A couple was walking up the path towards us. They had a dog on a leash and a baby in a backpack.
"Is that a Redtick Coonhound?" I asked. "It is," they replied.
"I've never seen one with so much white before," I said, then added, "And that's the first one I've seen around here," (well, except for the "Beagle Pointer Mix" that Ray and I met at the dogpark). "We've never seen one with so much red," the man started to say in reference to Ray, then quickly amended his statement to "We've never seen another one at all."
I asked the dog's name. "Her name is Bama. Alabama," the couple informed me.
Ray was sniffing his relative, then became aware of the baby in the backpack. I held him up on his hind legs so that he could sniff the baby's foot. Ray tried to get in a couple of good licks before I set him back down. The baby was smiling delightedly.
Ray went back to his doggy relation and briefly tried to get her to play. She didn't look to be particularly interested in playing with her cousin.
"Can I take a picture of them together?" I asked. "I want to post it on Ray's blog." They agreed. And here it is. Judging by the photo, I'd say their bloodlines cross right at the ears.
Ray and Bama. 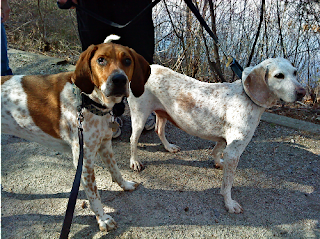