It's been hotter than Hades here but Ray still needs his exercise, not so much for any physical reason (well, there is the lymph node thing), but because he drives me crazy with the whining and shoe-eating if he doesn't get enough. So before the day gets totally scorching, I take Ray for a walk around the lake. I don't feel comfortable taking him that far without an available water source so I came up with an easy way of toting it along.

When I first brought Ray home, I knew nothing about dogs so I hired a trainer so that Ray could become all that he could be. (Little did I know that Ray already WAS all that he could be.) The trainer advised me to get a Halti to teach Ray to behave on the end of a leash (if you don't remember the Halti experience, click on the underlined word to see how that worked out). Since then, I have never used the thing except as described below.

One of my hobbies is repurposing/recycling things. I found that, with the addition of a couple of carabiners, the useless Halti can be repurposed into a perfect tote for a reusable water bottle and a transportable cloth dog bowl.

If you want to make your own tote, clip one carabiner through the hole on the screw-top of a Sigg water bottle (some other types of water bottles also have holes in their tops) and then onto the Halti part that goes around the back of the dog's head (as modeled by Ray below). 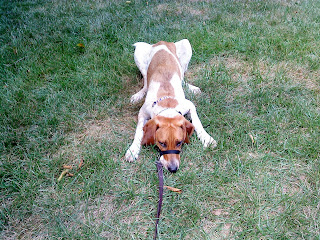 The cloth bowl can clip straight onto the part of the Halti that clips to the dog's collar but I use a carabiner because it's easier to remove the bowl. 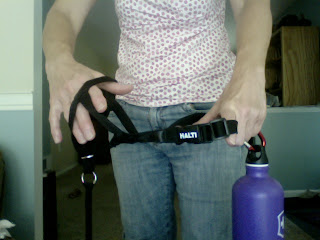 Here the water bottle is clipped to the part of the Halti that fits around the back of the dogs head.
The cloth bowl is dangling out of the picture on the end that clips to the dog's collar.

With the bowl and water bottle thus secure, slip your hand through the part that fits across the dog's muzzle and grab the part that fits under the dog's chin. Although it may look odd, it's a very comfortable and functional tote (and doesn't make me feel like I wasted any money on something that just didn't work out as a dog training device.) 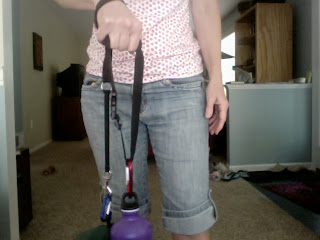 The Halti, repurposed as a water/bowl carrier

So for those of you who need a handy dandy water/dog bowl tote as you hike around the lake, and have an unused Halti lying around the house, (arguably a very small segment of the population), this is the thing for you.

No need to thank me. I'm happy to help.

And for those of you who don't need any such thing, here's picture of Ray basking in the heat and humidity of northern Virginia. (He only lasted about 10 minutes.) 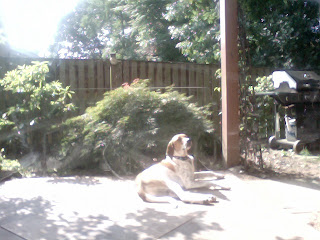