Can I help you? 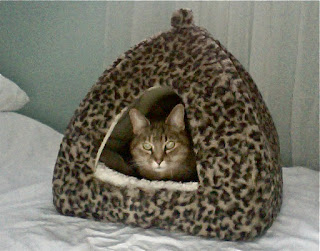 I was feeding the cats. As usual, Ray followed me into the cat room to visit his favorite cat, Moonie, and see if he could sneak some cat food.I was watching him peripherally, just paying enough attention so that he couldn't eat the food.
Moonie was in her faux-leopard-fur tent, (a Christmas present from Santa this year) just like in the photo, her head poking out the door, keeping an eye on the dog. I turned my back for a second and opened the dresser drawer where we keep the cat food. When I turned back around Ray's front legs were on the (human) bed, he was towering over Moonie in her cat tent but his tail was wagging and Moonie did not seem alarmed, she was just keeping an eye on him.
I bent over to put food in Hugo's dish and when I straightened up, Ray was entirely on the (human) bed, his head stuck inside the door of Moonie's tent. (I hadn't heard a sound, Ray moves like a ninja sometimes). I looked to see Moonie still inside, not cowering in fear as I would have supposed, just crowded because of the huge head that now shared her tent. Ray was curiously sniffing the little cat. She gave a meow of protest, but otherwise made no move to scratch or bite the giant head crowding her space. I took ahold of Ray's collar and removed the dog's head from Moonie's bed. Moonie made no move to exit or hide just watched me as I told Ray to leave.
Ray left. Moonie looked curiously on.
Another step in the right direction.
Posted by Ray the Blind Dog at 10:33 AM