It's kind of strange, but Ray can't seem to distinguish the Moonie that sits on the bed from the Moonie that walks around on the ground. Lately, whenever Ray follows me into the cat room, he makes a beeline for the bed (or for the cat food which is highly discouraged) so that he can nuzzle Moonie and give her a quick lick. This week, Moonie actually tried to rub her face on his snout, but Ray moved his head at the last second and she missed. After that, I was feeling particularly hopeful that we were in the final stages of the cat/dog relationship. 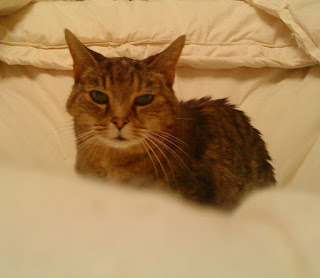 Moon Pie
However, whenever Moonie is on the ground, Ray just wants to chase 'it'. I don't think he can tell that it's his good friend, Moonie. He always starts the same way. He kind of leaps out with his front feet like he's trying to catch something, then (when there is nothing there) he taps around with his front feet a bit to see if he can feel 'it' - kind of like a blind man with a white cane. Then he rushes around trying to catch the scent. By this time, Moonie is usually up on something watching him like he's a total lunatic and I can see rethinking her friendship with the strange giant.

Hugo, on the other hand, still hates the dog with a white-hot passion. I have given up any slight hope that I ever harbored for the Hugo/Ray relationship. I've always felt that the best I could hope for was that Hugo would cease to be afraid of Ray and I think Hugo is getting there. Ray is gaining a bit of respect for Hugo ('s claws) and pretty much leaves him alone. (I say 'pretty much' because Ray will still chase Hugo up the stairs whenever he can - I think he thinks they are playing). The look on Ray's face every time Hugo spits at him is total surprise mixed with a lot of confusion. A look of "What the hell was THAT?" It is pretty hysterical but I always stop those encounters before Ray can find out exactly what that was. 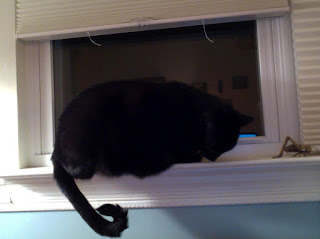 Hugo
Hugo is starting to come downstairs more and will lounge in the hallway while Ray is sleeping on the couch or a chair. My hope is that Hugo will get comfortable enough to sit on my lap again while I drink coffee in the morning. But I'm not holding my breath. It's been almost three years and we are only now seeing a thaw in the Cold War. 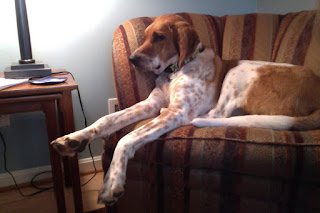