It's been awhile since we've gone to the dogpark. One by one, Ray's friends have either stopped going or are going later in the day so that we miss them. Also, in their great wisdom, the park authority has installed some blind-dog obstacles at the park. They call them dog agility training ramps and walls but Ray and I know better. It was a nice cool morning, so Ray and I decided to give it a go and see if he could find a nice dog to play with.
When we arrived, I was surprised at the number of dogs. There were even two of Ray's old friends running around. We went through the gate and a bunch of dogs rushed to greet us, including a large, brindle Boxer. Usually, when there are a bunch of dogs, Ray becomes instantly submissive until all the dogs get a sniff and then wander away. But this time, as soon as the Boxer got near Ray, the hair went up on Ray's back and he started to growl.
My immediate thought was 'uh oh.' Since I had NEVER, EVER seen that reaction from Ray, EVER, I was on high alert. I started after him and tried to snag his collar.
The Boxer had swerved out of Ray's way, the other dog didn't seem to want to tangle with mine, but Ray was tracking the Boxer's smell and was aggressively trying to follow the dog, hair up, growling. I didn't want to run after Ray and make him feel like I was helping, so I calmly walked after him, looking for a way to get ahold of him. Ray still had some dogs around him, but he was ignoring them, hair still up on his back, looking for that Boxer. An Airedale puppy (probably about a year old) got up in Ray's face trying to play with him. Ray snarled at the puppy then started yelling, intent on tracking the boxer. The Boxer, interested in the sound, made the mistake of coming to see what the hoohaw was all about. Ray went for him.
The scuffle brought the dogs toward me. I made a grab for Ray's collar and dragged him off the big Boxer who was giving Ray a run for his money. Ray was bellowing and struggling to get back at the dog who still was not interested in a fight and was staying well away. I dragged Ray back to the gate, struggled to get the latch open with one hand (it's tough to open even with two hands), shot open the gate and threw Ray through into the holding pen (there are two gates with an area between where you can take your dog off-leash). Unfortunately, the Airedale puppy followed, still wanting to play with the interesting stranger. Ray turned his pent-up frustration, at not being able to tear-apart the Boxer, on the poor dog. The puppy's owner came running. I once again entered the fray and dragged my vicious brute off of the smaller dog. The other woman took her dog out of the holding pen, I slammed the gate closed, and stood there looking at my dog, stunned. The one thought in my head was 'WTF???????????'
One of my friends came to the gate, the stunned look on her face must have mirrored the look on mine.
"What the heck was that all about?" she said. "I've NEVER, EVER seen Ray do anything like that before."
"Me either," I replied. "For some reason Ray did not like that Boxer. At ALL. I think the Airedale just got in his way."
The Airedale's owner came over.
"What kind of dog is that?" she asked. She didn't seem mad, just curious as to why Ray was attacking all the dogs in the park.
"He's a coonhound," I replied
"Oh," she said, "Maybe he's just used to hunting and that's why he did that."
"Ray has never hunted before. He's been blind since birth," I explained.
"Oh. Poor thing," she said as she turned away to go back to her group of friends.
I didn't try to dissuade her. Always play the blind card when your dog is in trouble.
I stood outside the fence and chatted with my friend awhile. Ray stood with his nose pressed through a hole in the chain-link. He was calm, the hair on his back was in it's usual position. There was no way in hell he was going back in that park. I said goodbye to my friend and we turned to leave.
Ray knew he'd been bad. He stayed right at heel as we walked the path back to the parking lot. I bundled Ray into the back seat of the car, my mind going a mile a minute.
I could only surmise that there was some bad blood between my dog and the Boxer (who I decided was probably named Lefty). Since I was pretty sure that I'd never met Lefty before, I assumed that Ray had met the Boxer before I adopted Ray. I presumed that, since Ray mysteriously speaks foreign languages, he must have met Lefty overseas somewhere. Because Ray seems extremely comfortable with the French language, I deduced that Ray must have met Lefty while they were in the French Foreign Legion together. Something must have happened between them that Ray is still angry about. I'm not sure what, but I'm sure that Ray had a good reason for going after that dog.
Now, about that Airedale puppy....

Addendum:
This comic appeared in the paper today - the day AFTER I posted this blog. I think I must be psychic (and that my dog isn't the only one that was in the French Foreign Legion.) (click the comic to get a bigger picture). 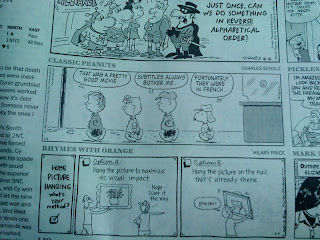 *The title of this blog has been changed.
Posted by Ray the Blind Dog at 9:44 AM