A Visit from his Family

Yesterday, Ray's foster mom, Amber, and foster sister, Jordan, visited us. Jordan had moved to the Greater Washington, DC area last year, and although Amber had tried to arrange a visit to see us previously when she had been visiting her daughter, the timing wasn't quite right on this end.
So yesterday morning at 10:00, sharp, Amber and Jordan arrived. Ray was waiting, stretched out Sphinx-style, on the rug in the front hall, "looking" out the door.
Ray knew someone was coming to see him because I had told him. Or, more accurately, I said "Who's coming, Ray?" This is Ray's cue that someone is coming to the house. (Usually it's Tucker or Murphy.) When Ray hears his cue, he goes to the front door and waits. He is an extremely patient dog and will stay at the door until someone actually does arrive (I've seen him wait for up to 30 minutes - he hasn't been tested longer than that).
So when Amber and Jordan arrived, Ray was ready.
As always, it was a touching reunion. Although Amber doesn't think that Ray remembers her, he does. I can tell by his greeting. Ray is always happy to see everyone but he has extra-fast spins for Amber and more of them. It always makes me choke up just a bit when I see Ray with his mom.

After quick introductions, Amber said "Can we see the kitchen?"
I laughed. (The large-undisclosed-amount-of-money dog door project had provided months of blogs.) We walked through the kitchen and out into the backyard, Ray demonstrating the use of his own, private entrance.
"Oh, wow!" exclaimed Amber, "The yard is much bigger than I thought."
(I made a mental note to ask our British friends if they had the same reaction. Does our yard look smaller in photos?)
Ray ran into the far back, then realized that no one was following and came back to flop on the struggling grass. Amber and Jordan joined him.
Ray enjoyed the adulation for awhile then hopped to his feet and headed back to the fence.
"Give us a yell, Ray!" I called out.
Ray obliged. Amber and Jordan were smiling and laughing.
"Can you imagine having a pack of those?" said Amber.
"No," I said shaking my head. "No, I can't."
"Did he do that a lot when you had him." Gregg asked Amber.
Amber laughed ruefully. "Somebody called the police. It's one of the reasons he had to go back to the rescue."
We all trooped back into the house.
Jordan pointed at the chairs and couch in the family room, "I recognize those," she said laughing a little.
I joined her laughter, pointed at the couch and said "...and there's Ray's favorite pillow on his favorite couch," giving her the same five cent tour I had given to Niki and Jez.
"Can we see the cats?" asked one of our guests.
We all went upstairs to visit Moonie and Hugo. They both got a brief glimpse of our scaredy cat before he disappeared under the bed. The invalid stayed put, curled up in her summer quarters.
I opened the cat door. Ray dashed in and grabbed a few mouthfuls of catfood before I could drag him away. Amber and Jordan watched, amazed, as Ray leapt onto the one section of bed not occupied by cat beds and sniffed around for his favorite cat. He located her, gave her a quick lick on the top of her head and sniffed around trying to find the elusive thing that always growls at him.
"Wow. Looks like things have really improved," said Jordan about the household cat/dog dynamics.
I watched a little nervously as Ray started to move around the bed.
"Careful, Ray, don't step on Moonie," I said keeping my eye on the frail little cat still curled in her bed.
I guided the big dog to the floor. He immediately headed back to the cat food.
Amber and Jordan cooed over Moonie a bit more, then we all headed back downstairs.
After a few more minutes of quality floor time with their old friend, Amber and Jordan were gone. 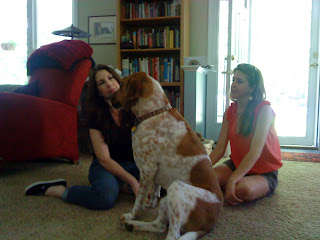 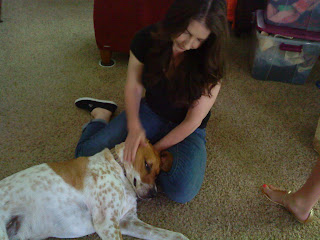 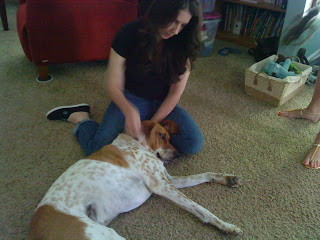 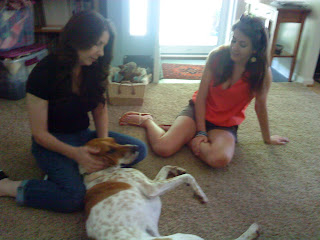