It happened in the middle of the night.
Ray had heard it and sounded the alarm. My sub-concious had heard it too, and I had lain in bed for a brief moment trying to process the thumpthumpthumpthump that I had heard before scrambling out of bed to calm the dog and investigate the noise.
Not knowing where the noise had originated, I went down the stairs and turned on the porch light to look out onto a deserted street, then to the back door to peer out onto a deserted patio. I stood listening for a moment to the quiet around me, then returned to bed. Ray, who had declined to join me in my investigations, was already back on his futon, sound asleep.
The next time I was awakened, it was by Gregg at 6 a.m.
"There's a tree down in our backyard," he said, "It came from the yard behind us and broke through a section of the fence. Looks like it took out some branches on some of our trees on the way down."
I lay in bed trying to get my eyes to work, then after a few minutes, crawled out of bed to throw on some clothes.
I went downstairs and followed Gregg into the backyard; it was a mess.
I heard a noise at the backdoor and turned to see Ray standing with his nose pressed up against the glass. I went to retrieve a leash and led the hound outside, guiding him around a pokey branch, and then along the fence so he could pee. We then walked around the branches covering the path, and into the grassy part of the yard. Ray stopped.
I pulled at his leash trying to get Ray to follow me so that I could view the damage through the fence but Ray wouldn't follow. He walked over to the air conditioning unit alongside the house and stood in his usual sad-dog mode, with head down around his knees. I pulled the leash and watched as the collar slid up over one ear of the unmoving dog. I rearranged it back down over his neck and handed the leash to Gregg.
"Could you hold him while I look?" I asked.
Obligingly, Gregg took Ray's leash and, while I poked around the destruction, tried to convince the dog to move away from the house into the yard. Ray resisted.
"Just turn him loose and see what he does," I said to Gregg.
Gregg unclipped the leash and both of us watched as Ray went behind the bushes, and avoiding the yard entirely, walked along the foundation of the house to the patio and then to the kitchen door.
"How does he know?" asked Gregg to no one in particular.
"I dunno," I responded as we both headed back into the house. 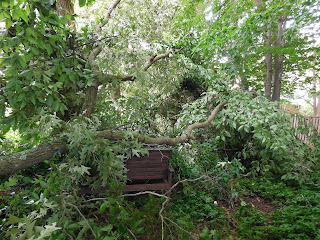 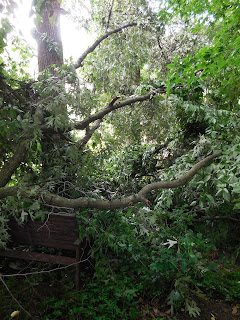