The Remains of the Day

I was de-stinkifying the carpet. Sometimes, it gets a certain funk that is hard to describe. Gregg doesn't smell it, but it bothers the heck out of me.

I was working on the stairs. I sprinkled on the Zorb, a product put out by the genius that created the Dyson vacuum, and was working the sawdust-like particles into the carpet with the specific vacuum attachment created just for that, when I heard the click-click of the dog door magnets. Not thinking too much of it, I glanced up.
Ray was standing in the front hall holding in his mouth a rawhide bone; a horribly muddy, leaf-encrusted, wet, flaccid bone. It had the look of an aged piece of parchment that had only recently been discovered.
His eyes bright, his tail swinging in delight, Ray was ready for a game of keepaway.
I did the only reasonable thing I could. I screamed.
Startled, the dog dropped the bone, scattering mud and leaf matter over the freshly-Zorbed carpet. Then, sensing that this was part of the game, Ray again picked up the nasty thing. His tail moving in overdrive, Ray stuck his butt in the hair and jawed the bone, weaving his head from side to side in a classic nyah-nyah-nyah-I-got-the-bone-and-you-don't move.
I hastily dropped what I was doing and started down the stairs. Ray took off to do a loop around the coffee table. I noticed as I chased him, that he had already been around the coffee table once; a trail of mud and leaf debris marked his path.
"Get out!" I yelled at the dog, "Go outside!"
Still convinced that this was a game, Ray happily dashed for his door, in his haste dropping the bone on the living room rug and rapidly recovering it, leaving another pile of mud for me to step over as I followed him into the kitchen. The trail of mud that he had tracked through when he brought in the bone was less obvious on the magic, mud-colored floor.
Ray shot through his door and into the backyard. Now that the crisis was over, I enjoyed the chase, trailing the hound through the yard until the game was over. Ray was intent on looking for a place to bury the remains.
I returned to my work and left Ray to his. 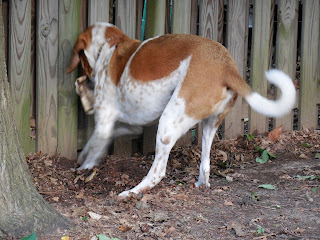 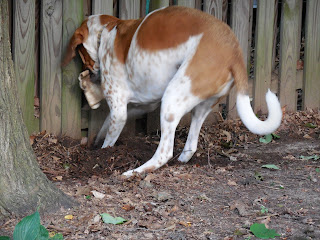 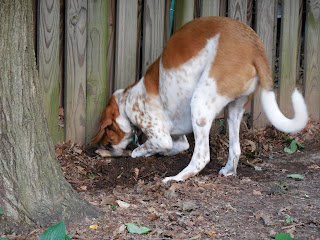 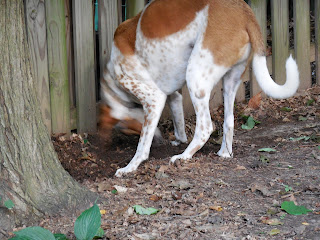