I'd had so many people tell me that I should take Ray to the dog park that I finally decided maybe we should go. I went across the street and asked Sandra if she and Maddie wanted to go along. Sandra was agreeable so we all piled into my car and drove on down.
Ray and Maddie act like brother and sister. That is to say, they ignore each other until Ray crosses that imaginary brother/sister line, then Maddie slaps him down. The brother and sister rode together in the backseat in silent doggy companionship. 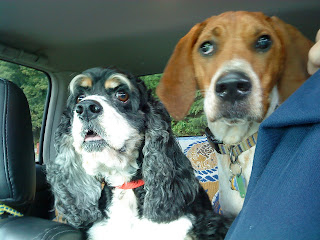 When we got to the park, a man was getting out of his monster SUV, a dog was in the back looking out the window.
Sandra looked out her window at the dog and said, "I wonder what kind of dog that is?"
I looked at the 'dog' and had a sinking feeling. The dog got out of the car and it was a monster on spindly legs. We exited our car as well, dogs on leashes.
Sandra asked the man "What kind of dog is that?"
"It's a Shepherd mix," he replied.
"Is it mixed with wolf?" I asked.
"Yes, he's half," replied the man.
We followed him to the park at a discreet distance. I didn't have a good feeling about letting my blind dog loose with a wolf hybrid. I hadn't heard good things about them.
"Just our luck that we go to the dog park on the same day as a wolf," I said to Sandra.
Despite misgivings, we continued on. The park turned out to be a large, rectangular, open field. The two long sides were abutted by wooded areas, benches on concrete platforms were there for the humans, a huge rock the size of a Lincoln Towncar was there to provide a jumping off spot for the dogs and an obstacle for the blind hound. A mud hole along one of the fences was also there, but probably not on purpose. Everything a dog could want with the exception of a fire hydrant. All fenced-in with chain link. The area was so large that I wondered if I would be able to catch Ray and leash him when I was ready to go.
Sandra let Maddie off of her leash and I walked Ray along the fence for a bit, trying to show him the perimeters. He wasn't really paying attention because of the other dogs. I was worried a bit about Ray running into a tree and hurting himself but the thought of him being able to run around without the leash was just too tempting. All of a sudden, I realized that I had forgotten my camera in the car. Sandra volunteered to hold him while I ran to get it. "Show him where the rock is!" I yelled as I headed back to the car.
When I got back, we turned Ray loose. He immediately identified a border collie mix as his playmate of choice and started to yell. And yell. And Yell. AND YELL. For the next forty five minutes Ray hounded that dog and yelled at him. The dog was playing with a lab mix and both of the dogs headed for the trees. Ray gamely followed, conking into trees when he got too excited to feel them coming. I stood by, yelling "BE CAREFUL" when he got too close to something (it works when we are on walks - not so well when he's playing with other dogs). I went into the woods after him, hooked him to the leash, and pulled him back into the open field. The smaller dogs followed but when Ray started yelling again, they dove for a hollow under the huge rock closely followed by Ray.
"BE CAREFUL!" I screamed as Ray trotted straight for it.
Ray flinched and swerved. I was sweating a bit in nervous fear for my dog. Again I hooked him to the leash and dragged him to the center of the field. The border collie left. I heaved a sigh of relief.

The humans had been moving in a straggling group, following the dog action, but were now standing together in a small clump in the middle of the field. I went to join them now that Ray was out of the woods (literally). The wolf was circling the clump of humans. We were all talking about our dogs. A young girl (in her twenties?) was there with a Golden Retriever named Brinkley. She was watching him closely.
"He found the mudhole last time we were here," she said, "I want to keep him away from it."

The man with the dog/wolf was saying how Toby (the dog/wolf's name) was terrified of kids. I replied that Ray had three priorities
in that order.
The man replied, "Toby only has one priority, dogs."
I looked at Toby who continued to circle the clump of humans, ignoring the dogs. I was starting to feel like lunch.

All of a sudden there was a blood-curdling scream.
"BRINKLEY, NO!!!!!!!!!!"
The young girl was running across the field. Brinkley had found the mud hole (which was more like a mud bath - the muddy water was chest deep) and was having a BLAST. The young girl came back to the clump of humans, dejected. Brinkley gamboled up grinning from ear-to-ear and shook himself off (obviously a jokester). We ducked for cover.
Ray decided that Brinkley was fun and started to follow him. Brinkley was beelining back to the mudhole. I ran after my dog, calling Ray. Brinkley entered the mudhole at a run, splashing the muddy water a good five feet out. Ray stopped dead when hit by the spray. I breathed a sigh of relief and stopped.
Both dogs came back to check on the human circle then off again. Ray lost his playmate for a moment and plowed headlong into the side of the wolf. I held my breath. The wolf didn't even register that he'd been hit. Ray picked himself up off of the ground looking a bit scared, then trotted off to try to find Brinkley.
I decided maybe I'd had enough excitement for the day. Sandra and I gathered our pets and headed home.