I had the day off so I decided to get a few things done upstairs. I'd been wanting to do something to the hardwood floors to get them to stop squeaking, so I had gone to the Depot to get some flooring nails and wood filler to see what I could do.

I opened the stair gate and let Ray follow me up. I'd let him up a few times before and he hadn't acted too badly, he just poked around a bit then settled down on the futon for a nap.
But things were a bit different in that the weather had turned cool. Ray's energy level had increased exponentially with every degree the temperature had dropped. Obviously he's been bred to hunt in the fall and this is his kind of weather. His long morning walk didn't seem to do anything to tire him out. On top of that, I took him to the dog park to run around for another 45 minutes or so. Nonstop. While yelling at a shepherd mix puppy that kept just out of Ray's reach.
I had made sure that the door latch to the cat room was engaged so I didn't pay any attention as Ray jammed his head through the gap in the door. The latch has been holding fine, as long as we remember to latch it. I went into the master bedroom to work on a part of the floor under a scatter rug that can't be seen from the door. If my trial fix didn't work out, or look good, then I didn't want to have to stare at it every day.
I had a screwdriver in my back pocket because I also wanted to fix a closet door that had come off it's track. In addition I had a drill, a hammer, and other assorted tools, rags, and a can of "plastic wood" for the job.
I set up my gear and got down on my hands and knees. I heard Ray come into the room behind me and felt a cold, wet nose press against my back. My supervisor had arrived.
I started to work with the close presence of Mr. Nosey. The nose moved down my back and I felt the screwdriver slip from pocket. I turned around to see Ray disappear out of the room with the screwdriver in his mouth. 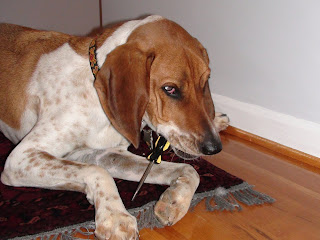 I retrieved it and went back to work. Ray picked up a putty knife and started to gnaw on the handle. I took it out of his mouth and went back to work. Ray rummaged through the trash can in the adjoining bathroom, I got him out of the bathroom and closed the door. Then Ray went to check out the trash on the other side of the room. I emptied the trash can and went back to work. Ray put his feet up on the dresser and tried to snatch a bag of cat treats from the back of it. I "bah"ed and got up to push him off the dresser and tell him what a bad dog he was. I went back to work. So far, I actually hadn't done anything.
Ray ambled out of the room. I heard a crash. Ray was now in Gregg's office. His front feet were on Gregg's desk and he was attempting to grab a fuzzy duster, the handle of which was jammed between the desk and the wall. I "bah"ed, grabbed the duster, and pushed Ray off of the desk. I went back to work (still nothing accomplished), listening as Ray roamed from room to room like a furry wrecking ball.
I gave up on my project and followed him. I reasoned to myself that if we're ever going to let him upstairs, he has to learn which things he isn't allowed to get into. Ray was leaving gaseous emissions behind him in every room. The cat food from the day before hadn't made him sick. It had made him jet propelled. My eyes were watering. I lured Ray downstairs with the fuzzy duster and closed the gate behind us.  Enough learning for one day.
I sat down to blog....
Posted by Ray the Blind Dog at 12:51 PM