It was a nice morning and I didn't have to go to work, so Ray and I headed for the lake. As usual, it was a struggle to get him to behave on the way down. He just wanted to run and I felt bad that I couldn't let him. I toyed briefly with the idea of turning around and taking him to the dog park again, but it's not that close and I had things to do.
On the way to the lake we met Tallie, a Basset Hound/Bluetick Coonhound mix (how do these things happen?); she had the coloring of a Bluetick but the legs of a Basket Hound. An unusual but very cute combination. Ray and Tallie were sniffing each other up, but Ray was being relatively calm so I was able to chat with Tallie's owner.
Tallie was a rescue dog like Ray. The rescue society had had her for awhile in a shelter in a different county and no one wanted her, so they had moved Tallie to our county's shelter, where her current owner, Sylvia, adopted her. Like me, Sylvia adopted Tallie, her first dog ever, late in life. She was 42 and had cats (and I think she said she has kids too) when she brought home Tallie.
"I don't know how I ever got along without a dog, " said Sylvia.
Thinking of my own hound, I agreed with her.
It was pretty hot by the time Ray and I neared home. We were only a couple blocks away and were at a corner getting ready to cross the street. A car was coming up the street with his turn signal on, so I told Ray to sit while we waited for the car to turn in front of us. Ray sat. Then flopped.
"Come on Ray," I said pulling on his leash. Ray was stretched out, not moving.


I could see him breathing though.
I knelt down behind him and tried to pry him off of the pavement with my hands. I could see the car slowly turn the corner and pull over to the curb. Oh, crap, I thought to myself. I had Ray propped up almost into a sitting position but he was pulling a Gandhi and leaning against me trying to flop back over. A man with a very concerned look on his face took a couple of steps towards us.
"What's wrong with him?" he asked.
"He's lazy and stubborn," I responded laughing, because at the first sound of the man's voice, Ray sprang to his feet and was lunging in the general direction of the guy. I swear Ray uses his flop as a ploy to meet people. The man laughed and shook his head.
"I've never seen that before," he said as he got back into his car and drove away. 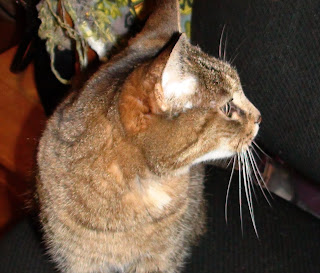