Remember Bess and Beverly, the vision-impaired Cocker Spaniels adopted by a co-worker of my sister, Kathy? (If not click on the link to see the posting). Well, Cheryl, who adopted Bess and Beverly, was contacted by the rescue society when Blanche, a sibling of Bess and Beverly needed a foster home while her owner recovers from a medical problem.
For those of you who have been wondering about Bess and Beverly (I know I'm always asking my sister about them), here's an update from Cheryl about the dogs.

Bess, Beverly and Blanche are sisters that were rescued from a puppy-mill in Kansas in Oct 2009. Blanche was adopted soon after because she had no health issues at the time. My husband and I adopted Bess and Beverly in April 2010. Since they both have health issues; cataracts for both, glaucoma and blindness in one eye for Bess, and occasional seizures for Beverly, they were harder to adopt. We got them and have loved every day with them!

A couple of weeks ago the rescue contacted to us regarding Blanche. Her owner had suffered a stroke and the rescue had agreed to foster Blanche. They were having a hard time finding someone to foster Blanche because she now has health issues – cataracts, partial blindness and an occasional seizures. No problem for us! We have had Blanche now for a week and have come to love her as much as our other two. More than likely we will end up being her forever home also!

The reason they are posted here; their adoption was inspired by Ray the Blind Dog.
Cheryl is my hero. 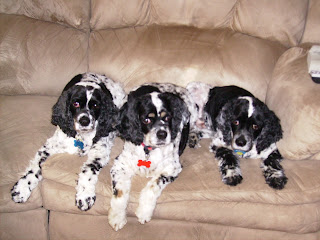 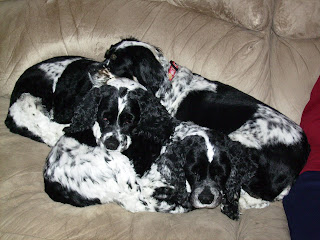 The Visual Definition of the Word "Dogpile" 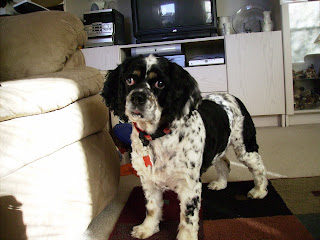 Blanche
Posted by Ray the Blind Dog at 7:52 AM