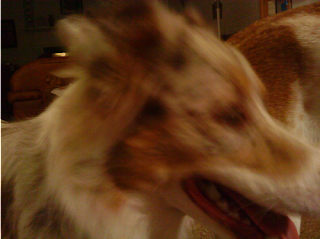 Rachel's sister, Sarah, dropped Murphy at our house around noon on Sunday. Seven hours of non-stop play ensued. It was like watching a Worldwide Wrestling Federation marathon interspersed with doggy porn as Murphy tried to establish her alpha dog presence in our house by (trying to) mount Ray (she's waaay to short for it to work).
They played outside. They played inside. They played while we walked them around the lake. They played in our across-the-street neighbor's backyard while Gregg and I raked leaves and ground them up in the chipper/shredder. By 7 o'clock Ray was tired but he wasn't stopping. They played tug-of-war, both of them lying on the ground (by this time I think Ray was too tired to stand). 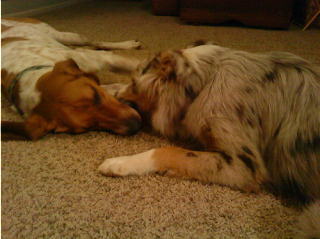 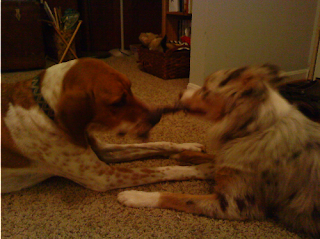 There was a 10 minute intermission before both started up again. 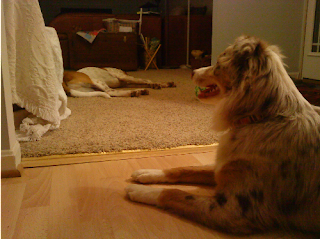 Intermission
Gregg asked, "Aren't they ever going to go to sleep?"
"Did you ever sleep at a sleepover?" I asked in response.
By 8 Ray couldn't take it anymore and curled up on the sofa at my feet. Murphy jumped up also. I scrunched into a little ball at the end of the couch in order to accommodate the extra dog.
Peace.
I was in bed by 10. But before I went I told Gregg, "Put Ray in his usual bed and see if Murphy will go to sleep on her couch. If not, bring her upstairs and put her on the futon." When Gregg came to bed, Murphy stayed downstairs with Ray. But then, Murphy, who apparently has ears like a bat, woke up at 11:00, barking at an unknown, unheard (by us), and unseen assailant. Her fierce, piercing bark roused Ray into raising the roof with his equally fierce but ever-so-much louder hound dog yell. Gregg went to calm everyone down and peace again descended on the house.
Until 12. Then again until 1:30. I took the 12 and 1:30 shifts, bringing Murphy upstairs to the futon, thinking maybe she couldn't hear anything if she was sleeping upstairs. (I was wrong.)
At 4:15, the unthinkable happened. Ray woke me up because he had to go out to pee. Murphy, not wanting to be left behind, joined us for the early morning potty patrol. The second the dogs returned to the house, the WWF was back. I tried to tame the action by grabbing Ray's collar and leading him to his bed but Murphy was tagging along grabbing at his face. Ray was responding with the crab claw, trying to grab Murphy by hooking a front leg around her every time she got in close enough. Ray was NOT interested in getting into his bed. I led him upstairs, Murphy nipping at him the whole way and Ray responding in kind. I put Ray's front paws on the futon and hoisted his butt up behind. He stood uncertainly for a minute then collapsed with his usual moan, curled into his usual tiny ball, and fell instantly asleep. Murphy stood looking at me, panting, a grin on her face. I stared back at her a second, thinking, then headed back downstairs, retrieved her couch, carried it up and plopped it next to Ray's futon. Murphy looked at me a second, then headed back down the stairs. Someone had to protect the house and it obviously wasn't going to the be the sleeping blind dog.
The rest of the night was quiet. 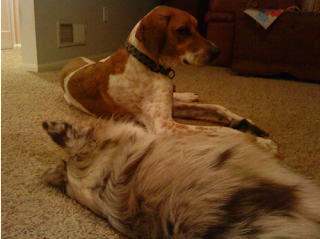 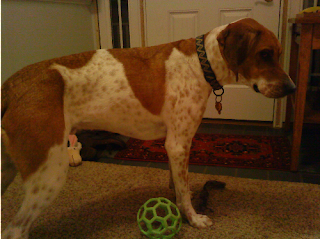 No, I'm Not Tired 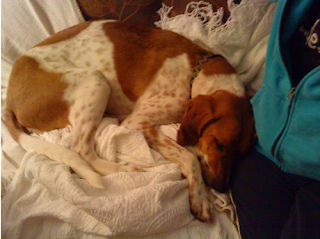 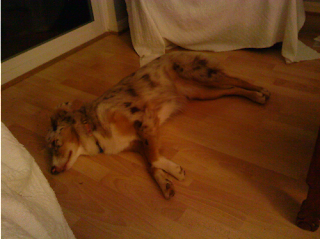 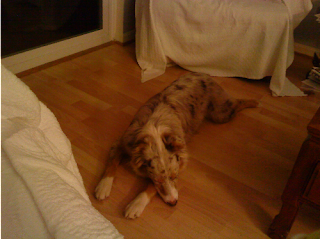 Guard Dog
Posted by Ray the Blind Dog at 3:26 PM