It was a dark and stormy eve of Halloween

I have decided, after much cogitation, that Ray is a good dog.

I admit that I had a few concerns about getting Ray to go do his 'business' while Hurricane Sandy was in town. But despite getting the "Aren't you coming?" look from him every single time he needed to go outside and refusing, in fact, to go outside unless he was accompanied, Ray was a good dog. He weathered the storm in fine style, only needing to be dragged out into the sideways rain for a very brief, but enlightening, walk after much whining to let me know that, in fact, he goes out every day for a walk at exactly the same time. Good dog that he is, Ray made an exception for Hurricane Sandy. He decided that perhaps, as an alternative, he could take his exercise in the form of multiple trips around the coffee table holding a bone in his mouth (cardio and weightlifting) and thought that perhaps we needed the exercise too and should, in fact, chase him. So, for the duration of Sandy, we all took our exercise as laps around the coffee table.

Ray was also a good dog for Halloween. This year, he was quite insistent that he should get to pick out his own costume. After three years of being dressed in humiliating outfits, (Sheerluck Hound , Stanley Kowalski, and a sheep (here's one more photo of that one), Ray wanted to go as one of his own kind. He described to me his requirements, and although I had my doubts about the thoroughness of his knowledge of the subject, I procured for him the necessary accoutrements. Satisfied, Ray did his trick-or-treating at the usual households (Halle's grandma, pictured below, and Maddy's folks) and we returned home in time to finish up our last minute preparations for the evening.

While Gregg prepared dinner, and Ray rested in anticipation of our nocturnal guests, I tweaked the Halloween decorations (having put them up once, taken them down in anticipation of the storm, and then put them up again in a Readers Digest condensed version). Upon completion of my task, Gregg and I took to the street to view the house in all its Halloween glory while Ray chose to stay behind, curled in his usual position of contentment.

After suitably appreciating the skulliferous display, we retreated to the house for our repast before the advent of ghosts, goblins, pirates, and hookers. Upon entering the house, I looked around for the hound wondering if, perhaps, he had managed to sneak out through the open front door without our noticing. I enquired if Gregg had, in fact, seen the dog leave the house. Gregg, in fact, had not, but opined that maybe Ray had gone into the backyard.


I entered the kitchen, through which I needed to pass to enter the backyard, just in time to view the dog with his feet on the counter, his neck stretched to maximum stretchiness, licking the chicken that Gregg had lovingly prepared and arranged on a serving platter.

I have decided, upon reflection, that Ray is a good dog, right up until the very second that he is bad. 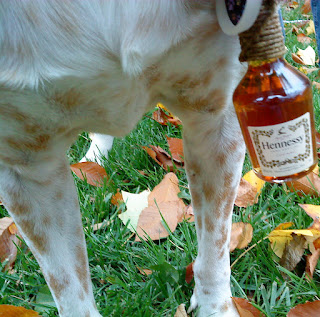