My niece Hannah is a remarkable child. Not because she is brilliant (even though she is). Not because she is beautiful (even though she is). But because she loves Ray and plays with him as if he were any other dog, just different. And even though Hannah teases Ray unmercifully, he loves her back and considers her as his pack.
Hannah knows that Ray's favorite game is keepaway. She steals his bones, holds them under his nose so that he knows she has them, then runs out of his reach. She taps the rawhide with her palm so that he can track her by the sound. He trots after her until he realizes that he has no hope of catching her, then stops and waits, pretending that he is finished with the game, his head down in sad dog mode.
Hannah, who doesn't want the game to end, calls and taps the bone, calls and taps the bone, getting nearer and nearer until Ray jumps out at her, trying to catch her with his front feet. Hannah squeals and runs away followed by the blind dog until he gives up. The cycle repeats. 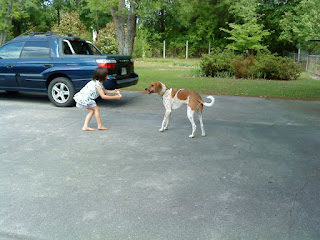 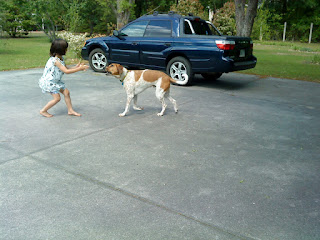 I cannot play this video with the volumn on. Ray hears Hannah's voice and he starts yelling. He knows she is out there and is going to steal his bone.
Posted by Ray the Blind Dog at 10:25 AM