Ray's friends have arrived!
Despite the fact that we had exchanged emails the day before, and I had offered to pick them up at the Metro station and take them to their hotel, I was woefully unprepared to do so. I had been running errands most of the afternoon and cleaning everything in sight most of the morning (overcompensation for the lack of order in the house - the fireplace was half constructed, the walls and ceiling are half-covered with primer and there are no pictures hanging) and the last two things I had done before the call came were put down some mulch and sand a board (I was testing stain for the new mantle). I was running my last errand for the day and was on the way home when the cell phone rang.
After the initial moments of typical "can you hear me? hello? hello? are you there?" reception (we live in a hole), I told Niki that I would meet them at the station. I raced home, reconfigured the car (I have the back seat folded down and configured for Ray so that he can lay on a platform), and decided at the last minute to bring Ray with me. I figured Ray's friends wouldn't be able to recognize me without the hound and I knew he wouldn't want to miss his big moment.
Ray was slightly confused by the seats in back instead of his usual platform but he adapted quickly, curled into a tiny ball, and went to sleep.
We beat Niki and Jez to the station by about two minutes. Ray and I exited the car and stood, looking around, waiting for someone to recognize us, (but we recognized them first by the suitcases they were toting). Ray excitedly greeted Niki, grabbing her wrist, then hand with his teeth. (Meanwhile, I was inwardly squirming at the irony of my dog being much better groomed than I. He had a pedicure, was wearing a clean collar, and had had a bath; while I was wearing shirt with a hole in it and was not entirely convinced that I didn't have mulch and sawdust in my hair and eyebrows.) I gave Niki a quick hug, hoping that she wasn't breathing in while I did so. We threw their bags in the bed of the Baja. Niki crawled in the back seat with Ray who was trying his best to kiss her on the lips. Jez hopped in front and off we went to the hotel. 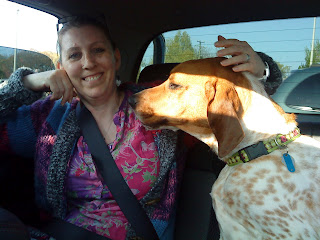 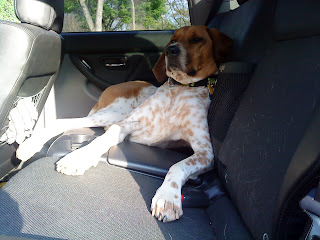 "I don't have to do what you say anymore. I'm famous."
(Ray refusing to get out of the car after returning home)
Posted by Ray the Blind Dog at 6:53 PM