Ray has a new friend (thank GOD). Ever since Murphy moved (a year ago!) I have been on the lookout for a playmate for Ray. This is much easier said than done. There are a few specific things that a good Raymate has to have


So, just before we headed down to S.C., Ray and I met Tucker, a nine-month old Australian Cattle Dog that lives on the street behind us.
Tucker fits the bill to a T (except for the fact that, unlike Murphy who steals Ray's bones and plays keepaway, Tucker steals Ray's bones and is a bit aggressive about keeping them. As long as we keep all bones out of the playground, Tucker will be the perfect playmate for the blind hound.) He is a zoomy little cannon ball, just the right height to run under the tall dog; tough as nails, full of energy, and always smiling. We have high hopes for this friendship.
One downside though. Tucker's family plans on moving in a year. I'm hoping that by that time, Tucker and Ray will be such good friends that they won't be able to take their dog away and break up the pair. But we'll take this one day at a time for now. 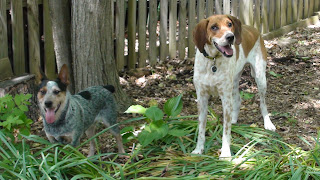 He is going to be here in fifteen minutes. I have to go outside and scoop the poops.
Posted by Ray the Blind Dog at 5:18 AM